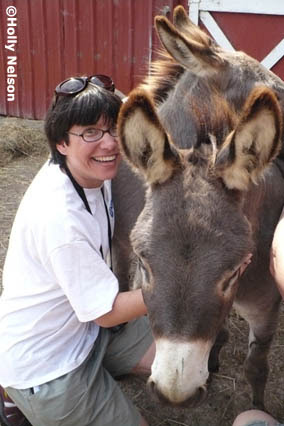 Pino recently had very special guests. Nuansi and her twin sister Ganjana [and wonderful artist friend Holly who took pictures] were making a long coastal trip down from Seattle. On their way home, they emailed and asked to visit for a Therapy Day. The twin sisters are film makers and artists and Nuansi is challenged by Aphasia & Speech Apraxia, which makes it difficult to speak. She uses short phrases with significant words, making it difficult to understand her, and for her to express herself. In addition, she has limited control of her voice box, making her voice unclear and difficult to hear. 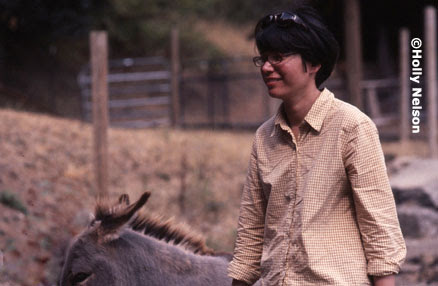 What is so charming though, is Nuansi got out of the car with a huge smile, and continued smiling the whole time here. Her heart is huge, as is her sister's - this is further exemplified by the fact the two sisters traveled to Cambodia [with Holly] and along with 20 volunteers built 10 houses for a village. They have a made a short film of this effort, and left me a copy. It is a heartwarming, gentle look at a gentle country, torn up by genocide and poverty. I was very moved by it, and encourage anyone to purchase it. I really didn't know much about what the country looked or felt like, and I came away with a sense of that. 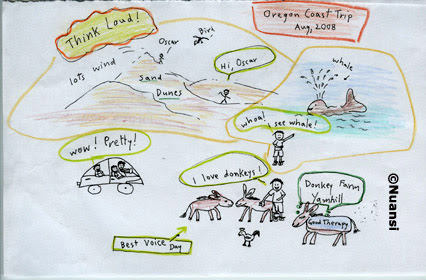 Nuansi also uses drawing as a way to communicate. She showed me some little sketches, maps really, of the places they'd been on their Oregon coastal journey. And she sent this one to me today. I am so pleased that she notes her day at our farm as 'best voice day'.All three artists took time to bring their sketchbooks into my studio and we shared as artists, which is always special. 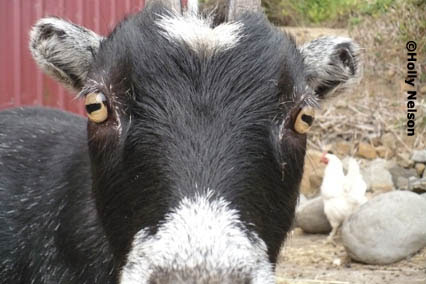 I was also so amused that when they asked to have a Pino Therapy Day, they also requested to meet Ward Shumacher the rooster! Ward was honored! And of course, as you can see, Frankie the pygmy partook.

Pino once again showed his intuition. While Martyn and I gathered our three guests around all three donkeys, it was Pino that leaned into Nuansi. I really felt, I know, he sensed her communicating in unspoken ways. He did not need clear speech from Nuansi. Oddly, the night before their visit, I had watched a PBS show on using dolphins and horses to help a variety of speech challenged people. I had not opened my mind up to reaching out to this group of people, and I felt Nuansi's visit was a gift, and a nudge. Allowing such children and people to hug a donkey allows them to feel as a whole communicator, with or without words. It is the heart these animals sense. Pino senses fear in you, sadness in you, anger in you and calm and joy in you.

These are the kind of visits that make me feel good about Donkey Dreams. Thank you, Nuansi, Ganjana and Holly for writing us and opening your world to us.
Posted by Katherine Dunn/Apifera Farm at 10:01 AM

Email ThisBlogThis!Share to TwitterShare to FacebookShare to Pinterest
Labels: Pino, Pino gets visitors

This is so lovely. I'm happy you and Pino were able to provide such a special experience for your guests, and that the visit was so meaningful for you as well. Mini donks rule! And so do you.

What a wonderful moment I just had reading your post. A~

at a wonderful gift--for all of you. donkey love.

You have a wonderful blog.

I just found your blog, browsing through... Being an animal lover, I must say I just love it... Thank you!

Way to go Pino! Us animals are the best at communicating without words. Pino was lucky to meet such a nice lady.