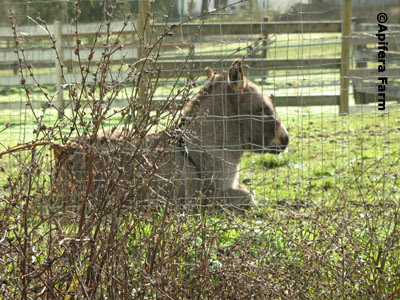 What's going on in the little head? How are his thoughts constructed - in shapes and senses strung together like a little movie? Perhaps, just as we ramble on in our heads in full sentences, he rambles on in his own thoughts, only in brays, and snorts, and hoof scratching strung together in a symbolic code of donkey language. I am still learning the symbols, and hope to someday write a dictionary of donkey sign language for human observers.

So while I can't write the donkey symbols in his head, I can try to translate it here into human language. I know Paco quite well. He is a worrier, he is insecure. He can't quite get used to the idea he is safe here. He is the kid in the school yard who is invited on the team at recess, but insists on keeping the ball all to himself, because he just knows he'll never get it again.

So I imagine his conversation to himself in this picture might go like this: "I see them over there. Together. I see them. They have my hay. I ate the hay first. Now they are eating the hay. I need to go over there. They need commands. They don't know how to do it without me. They are always together. I need to make sure everything is properly done, like I do it. I'm worried about the hay. What's that noise now? It's a chicken. The chicken is in the hay. It's my hay. I hate the chicken being in my hay. I have to go there now. I'm worried."

Each night, I spend time hugging and grooming the donkeys. Even then, the chatter in little Paco's head can be felt. He feels he must dominate the herd even in a time of relaxation. I work with him to show him I am the herd boss, hoping someday he will see he doesn't have to be the boss of all. It's a lot of pressure on an animal to feel he needs to be in charge of everything. That is why I gave Paco pumpkin duties this year. I will write about that in the next post.
Posted by Katherine Dunn/Apifera Farm at 2:01 PM

This is funny! I can totally "hear" Paco's voice in my head!

I have been reading your blog for quite awhile and I really love it. I have laughed and cried and shared with co-workers your lovely blog. I really like your Apron Wearers for Obama and thought you might like to see my banty hen's thoughts on the matter on my blog. I also have a picture of a friend's little guy Frodo in a post as well. I am new to dealing with computer stuff so it is just a post, I don't know how to do too much yet. When my boyfriend and I went to visit his family in England we made a stop at the Donkey Sanctuary there. I had read about it a year or so before we went and made sure that was on our list of places to go. It was amazing, we didn't want to leave. We're in Eugene and hope to get up there for one of your open farm days. Thanks for sharing your loves with us!
Tonia

What a cute little fella! I have a dog here who is a worrier and thinks SHE is the boss too, and we are working on that....I love your apron wearers for Obama sign! :)

Katherine,
I love your thoughts and stories about your farm animals. I can't wait to read about Paco and pumpkins.
Debbie

I can hear Paco too :) maybe he needs a lavendula bath ;)

Oh sweet' sweet Paco. I just want to sit and discuss life with him, and give him a hug. We who live with animals start to understand them. It's such a gift when they allow us in.