"I'd like to know how you plan to achieve that elevation?" said Iris, as she looked up towards the sky.

"I've been thinking about this all week. With some help, some good timing, and the right balance, it should work out for the best." said Stella.

"We shall not use the donkeys this time. The effort to get them over the fence, in a timely manner, is not worth the risk. This time we will have chicken aides."

"They have flight capabilities, very important in this endeavor." said Stella. 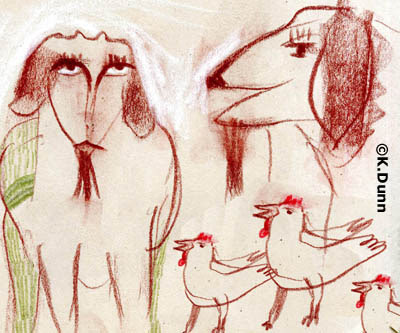 Stella and Iris proceeded to walk around the object of their desire, a walnut tree about 30 feet high, and as wide. The tree was over a 100 years old, and had suffered many a lost limb over the years. It had served as a natural swing set for a child many years ago, with rope marks to prove it. And currently the many cats of the farm came to shade there, under it's huge flared skirt of branches. But it was not entertainment through swinging, or shade that the two goats sought. They were after one thing, and one thing only.

"Nuts." said Iris. "Nuts have always gotten us into trouble, " and she shook her head.

"Oh come on, where's your drive? Snap out of it. One can not achieve the height of this tree with such pessimism." Stella scolded. "Are you in, or out?"

"Alright, now you wait here." said Stella. And within a few minutes she returned with a bevy of hens: Henny Penny, Henny Jennie, Chicken Named Dog, Alice and the Three Janes.

"But I'm the youngest, with the most strength!" declared one of the Janes.

"And I am the oldest, I'll go first!" said Chicken Named Dog.

"Calm down!" said Stella. "There is a precise order to your assent."

Stella proceeded, "Iris, you're on the bottom."

"Then I shall be on top of Iris. Then Chicken Named Dog, followed by Henny Penny, Henny Jenny, and Alice is on the top." explained Stella.

"What about us?" said the Three Janes, three Barred Rocks almost identical in appearance.

"You are the back up squad. So stand at attention in case you're needed." said Stella.

Iris took a deep breath and Stella climbed up on her shoulders, and then Chicken Named Dog climbed up on Stella. One by one the hens hopped up on the shoulders of the creature below them. Except Alice, who tended to over analyze any situation.

"I'm not sure if our initial placement is right. Shouldn't we be standing further out from the main trunk area?" asked Alice.

"Excuseeeeeeeee me! Can we get on with this ladies?!" said a wary Iris, from the bottom of the pile. 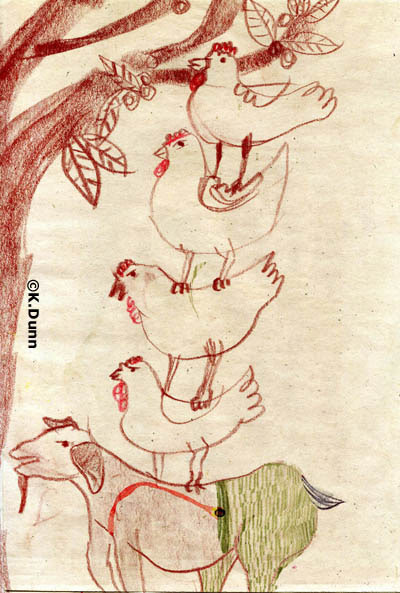 "Hop on, Alice, we have limited shoulder strength!" said Henny Penny. And Alice made her way up, one creature at a time, untill she was way up top.

"Did you just poop on me??" said Chicken Name Dog.

"Well, excuse me for relieving myself! Did you have to announce it?" said Henny Penny embarrased.

The ladder of creatures was pretty stable, so Stella yelled out, "OK, on the count of three, we take three steps forward. Then Alice, hop onto the very top of the tree, and start hopping from the branches to promote nut drop!"

And the live ladder moved one step, two steps and finally three steps. Alice hopped on the tree and began hopping, and shaking the branches as best she could.

And it began to rain nuts.

"It's working!" Stella declared. And for a brief moment in history it appeared the caper was going to work out just fine. The nuts kept dropping, forming huge piles all over the ground, deep piles that one could sink their ankles in.

And then Iris coughed.

The ladder of creatures lost it's balance and swayed to the left, and then teeterd to the right, swooned to the front, and swayed to the back, all the while many "Ohhhh -nooooooo- ohhhh's" were heard from both chicken and goat. Seeing the disastor unfolding, the Three Janes covered their eyes and huddled in a group. A swooshing sound was finally heard, leaves could be heard crackling, and nuts were heard crunching.

When the air was still again, and tall ladder of creatures was now grounded, there were a few sniffles, and deep breaths. Stella sat on a pile of nuts, rubbing her eyes and reacquainting herself with the earth. The chickens flapped wings to make sure everything was still working, and the Three Janes came to inspect their mates for serious de-feathering.

And from somewhere, a muffled murmer was heard.

Stella looked at her bottom, feeling a vibration form below her. Suddenly, nuts started spewing up from the pile, like a rodent backing out of its hole. And out popped Iris's head.

"Excuseeeee me! I'm under here!" Iris said, spitting out dirt and grass.

Everyone helped her up, and dusted her off.

There now, you're just fine, Iris." said Stella, helping to pick nut shells out of her hair. "Well, I for one think this was a very successful caper!"

And suddenly, a chicken came tumbling down from the tree top, hitting Iris on the head.

"I'm so sorry, Iris!" said Alice. "I lost my depth perception in the thick branches!"

"What you should have said, Alice, was, 'Oh nuts!" said Henny Jenny, and she laughed heartily at her own pun.

"Nuts to you, Henny Jenny!" said Alice, and she too laughed at her own joke.

"Okay, okay, let's just get the nuts picked up and move them to the barn, ladies." said Iris.

The hens rolled their eyes at Iris's lack of a sense of humor in an obviously humorous time. They diligently began to gather the nuts in buckets found around the House. Suddenly, Chicken Named Dog broke out in a heartfelt rendition of "I Had a Little Nut Tree" and everyone joined in, including Stella. But not Iris.

The group worked diligently gathering nuts, all the while singing their song over and over and over...and over. After the fifth time of hearing the chorus, Iris gave in, and began to hum.
Posted by Katherine Dunn/Apifera Farm at 11:41 AM