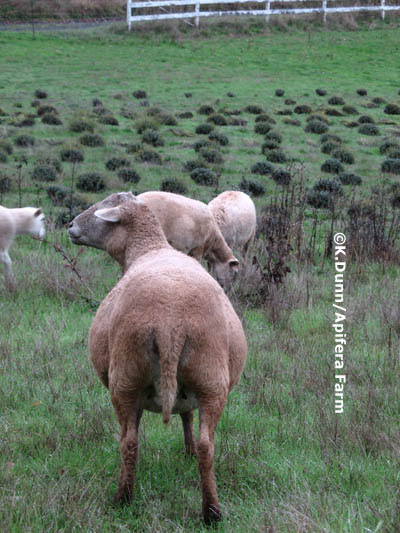 "Daisy! Daisy!" I said as I entered the field tonight. "It's so good to have all you ladies back together! Come over here and see me!" And she did. 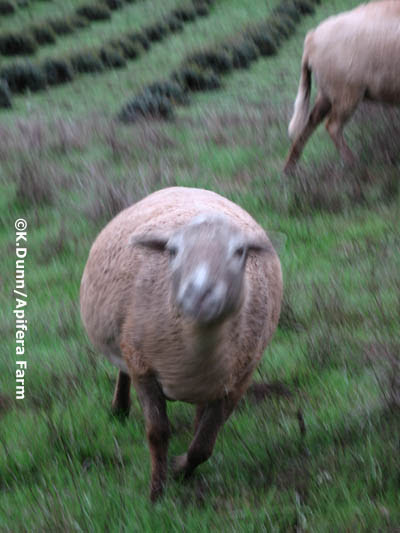 During this breeding season, 145 days of separation anxiety for the lady flock, and shepherdess, I think I missed Daisy most of all. I could see her everyday of course, in Concubine Field, but I didn't get my special Daisy time each morning. That would have meant Joe Pye time too, and believe me, you really don't want to have Joe Pye time unless you absolutely have to. So I missed the lady hay clatches.

I separated the three rams out on Saturday, tearing them from their ladies-of-the-season. This in and of itself was quite a task, if I may brag a bit. Hey, you try it. Now all the pregnant ewes are back together again, along with the younger virgins. I love having my flock back.

I think the reason I miss Daisy the most is she was our first ewe, along with her mother Rosie, who as my long time readers know, died tragically last March, along with her triplets. Daisy spent every day with her mother from birth, and when Rosie died, Daisy was 6. I really felt she changed after Rosie's death. A light sort of went out. Some might accuse me of placing my own feelings onto an animal, but I know this animal. She just seems different...rather sad, or...accepting of the situation at hand, but meloncholy. I was going to retire her this year and let her be baby free for the rest of her life, but I changed my mind, knowing that it is her innate urging to breed. When I saw her in heat weeks before breeding began, and she was hovering on Joe's fence line, away from the flock, I had to look at things from a sheep's inner programed desires. She's programed to breed, and lamb.

But she already looks so huge to me. I hope she doesn't have triplets. I am now officially terrified of triplets. I admit, after the ketosis tragedies of spring, losing our two best ewes and 6 lambs [both had triplets] in 2 weeks, I'm nervous this year.

Seeing Daisy pregnant again brought it all back. But it also reminded me that it's a new lambing season, and that's what we must focus on. And I will do my best for her. 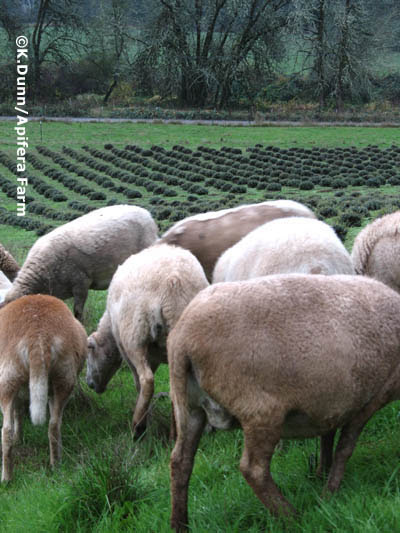 It's all about life on a farm and I know that you will do whatever has to be done and that will be "your best".
Beautiful photos....

Thanks Farmlady. Ebb and flow....