Winged guides and the countdown begins 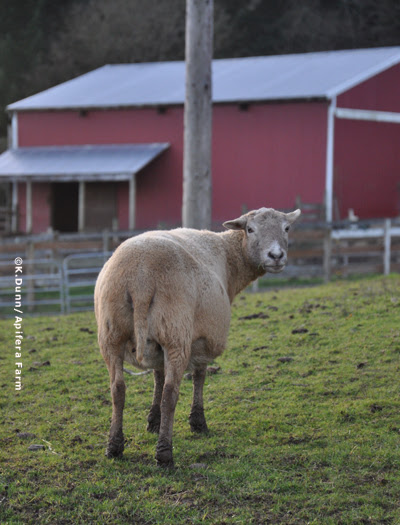 The pregame show for lambing season has begun with three to four weeks until the live performance. I have separated out the mothers to be from the flock, have their lambing stalls ready where they dine on special protein feed and alfalfa. The other sheep tell me it would almost be worth being pregnant with twins to get some of that alfalfa, which we only feed to the pregnant ewes. This year I chose to only breed four ewes - Daisy, Lilly, Bessie and Audrey. They know my compulsive routine will now begin - daily tail lifts to look for signs of...anything. Undignified. They ignore the fact I stare at their udders morning and night, looking for that last minute blow up, a real sign something will pop soon.

"Why she bothers with all this, " I can hear them think, as they chew some cud, "we get it done every year, the same way, usually when she's sleeping."

Daisy is my elder stateswoman and one of my favorite ewes. She arrived in 2004 with Rosemary and Joe Pye Weed to start our flock. She is not only a wonderful mother, she is dignified and what I would call a "subtle leader". She has her place in the upper hierarchy without being pushy. I can rely on her to answer my calls and get the flock to move anywhere, anytime. I almost didn't breed her this year, but each time she came into heat she was so pathetic looking, standing for hours just staring up to the ram pen. She is programmed to breed. I caved. She turns eight this spring and I won't breed her again, so this will be the end to our initial line. She has given us so much, it is her time to rest. I've noticed her limping more this year, and it isn't foot related. Those skinny sheep legs get old too, so I thought it was time to retire her.

Each painting can be a prayer or a calling of some kind. One doesn't always know what one is calling out for, but this little piece seems to beckon to all my powers to help me make good choices this lambing season. We all know I've made mistakes. Half this stuff you learn on the fly, and some times there are grave consequences. I've been conversing with the flock, telling them it will be fine.

But we all know sometimes things aren't fine. It's just the way nature works - I'm not the conductor, I'm more like the flute player trying to keep up with the beat, and send out good vibrations.

Still, spring is the season, as is lambing time, for optimism. It is a clean slate. Beauty will be born in the barn right along side the sounds of old goats eating their hay. 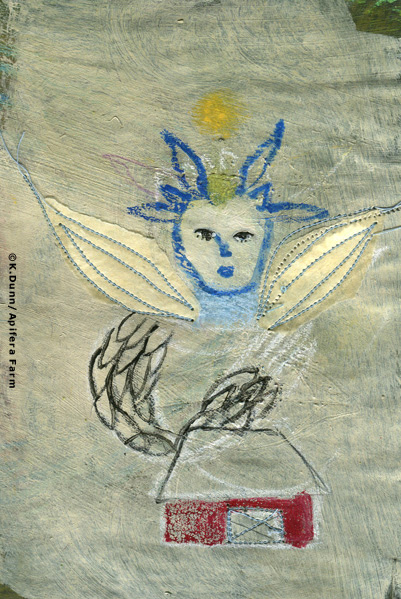 Posted by Katherine Dunn/Apifera Farm at 11:12 AM

Email ThisBlogThis!Share to TwitterShare to FacebookShare to Pinterest
Labels: Art, Life on the farm, Sheep of Apifera

This is so beautifully written, Katherine. You articulate a growing wisdom of farm life and loving interaction with your animal community. This was such a pleasure to read. Wishing you and the ewes a good lambing season.

I'm sending good thoughts to you and your girls for a safe, happy lambing season.

Good luck lambing! Can't wait to see pictures. We check the pregnant goats the same way and you do feel foolish looking at goat butts day in and day out, lol! When Freddy our mini donkey was on his way, I'd feel him kick and check his Momma's utters constantly. There's nothing like a birth to usher in Spring and renew our spirits!
Hugs
Amber