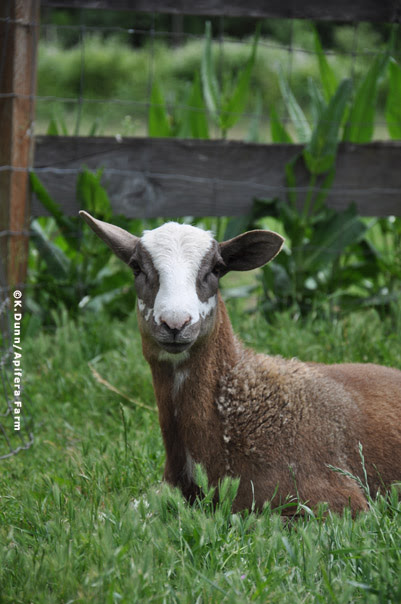 I brought home our new ram lamb this week. What a beautiful boy he is! I named him after a blues musician since I think rams must have a lot of blues, separated from the girls so many months.

He had a traumatic day of being stuffed into a crate and then spent the afternoon in the barnyard meeting all the goats. I couldn't bare throwing him in right away with the big rams, but when I did, they were gentlemen. They took care of their own hierarchy without me.

We also said farewell to Daisy's last ram lamb who went off to breed in a small flock so I know he will have a good life. It was bittersweet though, as I have decided to retire Daisy. She came to Apifera with Rosie and Joe Pye Weed in 2004 and helped build our flock. I love her with all my heart. She has been a leader in so many ways- helping me as a new shepherdess with her calm demeanor. She has become a bit arthritic and is going on eight, so I wanted to let her spend her remaining years relaxing and grazing.

After her ram left, she kept seeking out his sound and when I brought everyone in at night I could tell she was calling for him,

Watching any animal leave the farm is traumatic. Feeling the shakeup in the herd or flock is hard on everybody, but we all adjust, we all survive, we all get up the next day and do the best we can do.
Posted by Katherine Dunn/Apifera Farm at 4:39 PM

Thank you, for this, "Watching any animal leave the farm is traumatic. Feeling the shakeup in the herd or flock is hard on everybody, but we all adjust, we all survive, we all get up the next day and do the best we can do"

Little Walter is so beautiful.

This must have been so hard for everyone there. I am feeling the sadness as well.

You're blog is one of my favorites, even though I always end up in (happy & sad) tears. Such is life I suppose for all of us, with all it's ups and downs. Welcome Walter, goodbye little ram, try not to be sad Daisy. May you all continue to have a wonderful life.

that's hard....and i don't ever like it. this week my husband carried our "calf" (600+pounds) to market...the jersey with the heart on his forehead. jubel has called and called for him and walked the fence....but a 600 pound "pet" is expensive and just doesn't work....not the plan. i feel for you...

Thanks for visiting and writing everyone. Life continues and flows and ebbs for all of us, right?