Amongst chickens in awe 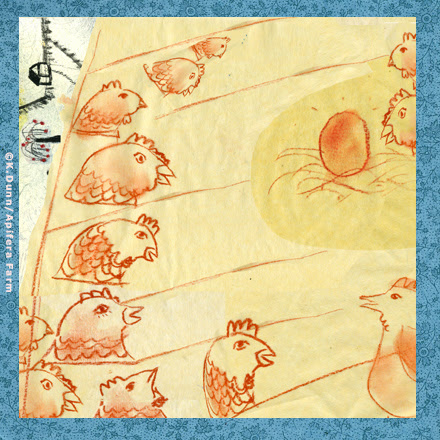 "Did you see the size of that egg?" she asked.

"It's as big as our heads all combined," said Clara.

The hens had been sitting up in their rafters, some 12 feet off the ground, looking down on the one lone and very large egg. It was triple the size of one of their eggs, Vivienne had noted earlier.

"Maybe triple time two the size of ours, Vivienne" said Henny Penny, the oldest of the hens, and the tiniest.

"What is she then?" asked Edmonia Lewis, one of the flocks most consistent layers.

"She's a deformed chicken, I think. Her neck must have been pulled through a hole by a raccoon, it's a miracle she survived and I think we should be nice to her," answered Alice Waters the chicken not the chef.

"Her feet are like that clown we saw in that animated movie last week on cable," said Chicken Named Dog.

"Poor thing, did her feet get pulled flat by the raccoon too?" asked little Henny Penny, cringing.

Just then Papa Roo hopped into the hen house to find all the ladies up on their rafters. He noticed the giant egg on the hen house floor, watched it for a short time, then joined his harem.

The hens always waited a few moments to continue a conversation when Papa Roo came in the room. This was not done out of fear, or because they felt inferior, they just learned over time that it was best to let him start the conversation because if they started the conversation he would always interrupt, and chickens hate to be interrupted, at least the hens at Apifera do.

After minutes of feather cleaning, Papa spoke up, "What's all the chatter? I can hear you all the way across the barnyard"

"The egg. We are talking about the egg," said Vivienne.

"The hen that laid it had her neck pulled by a raccoon and her feet were squashed like pancakes by a tractor," explained Florence.

"That is no chicken egg, ladies."

"No, definitely not a chicken egg, " the rooster said sternly.

"No, I'm afraid we might just have a dinosaur on the environs," Papa Roo continued.

A collective "Squawk!" came over the flock that dissipated into hush, and then more pensive silence.

to be continued at a much later date....
Posted by Katherine Dunn/Apifera Farm at 12:02 PM

Hilarious! Can't wait to read more. I love it. Thank you for sharing what happens in the coop!

Oh, my goodness gracious. I needed that laugh. This is fantastic. I love your love of and understanding of animals. I love your artwork. Keep. it. up.