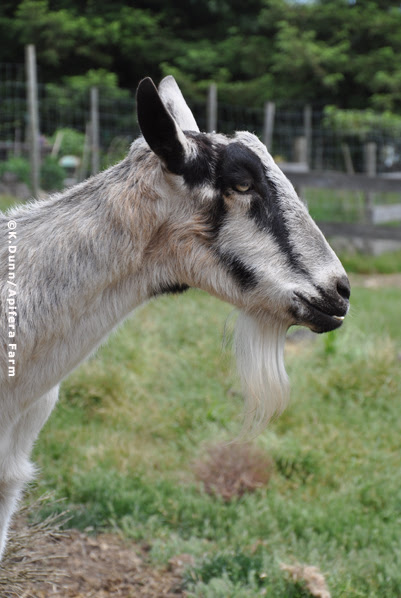 He stands so tall that when I greet him at the gate, his back is to my waist, allowing me to hug his face without even bending over. Quite convenient for woman and goat. His beard blows in the wind like the goat version of a ZZ Top video.

He came with the name "Lightening", but when I told the barnyard that Lightening was coming, they all ran for cover. Hence, a name change. And it took forever because he is quite mythical in movement and stature, but also so gentle and loving. He arrived the Friday before Pie Day, delivered by Lisa Hildebrand and her calm husband who took it in stride. Lisa makes art out of rusty metal so she eagerly went through the scrap bin in the old barn. She hauled a goat and took scrap metal as a gift. Wow, that's a woman I can get behind.

After days of trying out names with my NYC friend and Pie Day helper. we fell on the name of blues legend. He already has many nicknames like Big Honey, Honey Man, and Big Man.

Honey Boy lived his entire life as a pack goat and was treated well by his only owner. His feet were cared for well and he worked hard for her. But eventually he got older and arthritic, and she quit packing. And his goat companion died. Eventually she felt it best for him to go to a home with goats, so asked New Moon Goat Farm to help. When I saw his face, and heard he could be led by his beard [yes, it's true] I was intrigued.

This guy is a lot of fun. He greets me at the gate and follows me around like a big old dog. His first few days were rather sad and I could tell he was searching for someone, anything, that was home. He did bond with my voice, but ran the fence line crying much of the time. I decided on the second day to take him up to Muddy Hill, hoping that if we went on a mini pack hike, he'd realize I was here to be his leader and he was here to accompany me. He seemed to really enjoy it, and he'd stop occasionally to look around or at me, but with comfort and calm, like, "This is what I remember doing." From that hike on, he didn't cry as much and he's really calmed down. He hardly ate when he got here and was, and still is, very thin. But now he's eating well and anxious for his food so we'll get the weight on.

While working on my Sort of Top Secret Known Only to Frankie, Old Man Guinnias and Most of the Chickens Master Plan this month, I realized I have gathered animals that will allow me to do more on site interactions with children and adults, and most importantly, seniors. To share senior creatures with senior people has always been a goal and I inch closer towards, slowly. But who cares if I do it at donkey speed?

Old Man Guinnias is getting much too crippled to navigate much and might not enjoy having people pet him at length. He's always been a loner and prefers me as his guardian and daily chore companion, but really is having a hard time walking and falls quite a bit due to balance issues. It's heartbreaking. He's still My Old Man, my first old goat. Honey Boy will never replace Guin, but he will help soften the blow when his time comes. 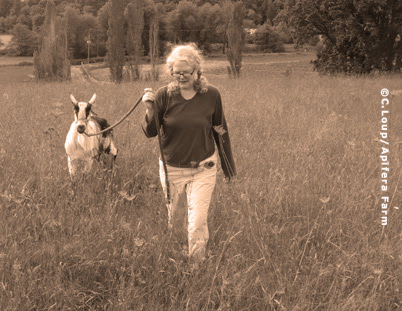 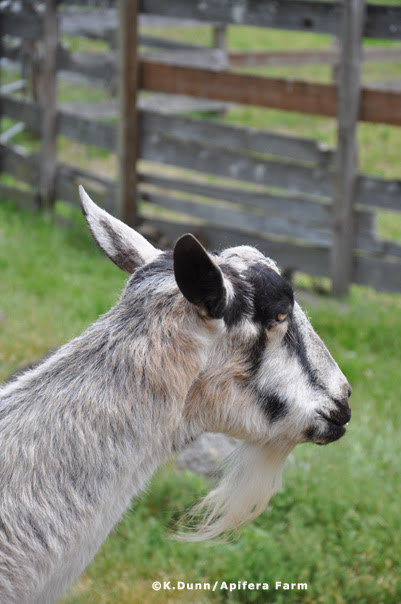 Honey Boy is so handsome. I have a wire haired dachshund. He has a beard but I keep it trimmed shorter than Honey Boy's beard. I always look at my doxie and tell him he is part goat as he loves to eat grass and paper...lol.

You do so much for old animals Katherine! I am so sorry that old Man Guinnias is having such problems with his arthritis. Give him an extra hug from me. Karen

he is gorgeous!! i can see him in a painting playing a guitar (with his beard blowing back)...

Love this Honey Boy. A gentleman, through and through.
xxoo,

What Lisa said. He's a special guy, with enormous presence and lots of stories to tell.

(Thanks for the photo credit!)

Honey Boy has a face that could be chiseled in marble. So handsome and so pensive! He is the Clark Gable of goats....

(My word verification is "copse"! -- always loved that word --means a small, secret, grove of trees.)

Makes me smile to think of you and Honey Boy on a special bonding hike. So glad he's settling in - have to think it must be pretty nice to be a goat on Apifera Farm!

I think most everything should be done at donkey speed -- very mindful :) Honey Boy is so darling ♥