The magpies escourted his fur 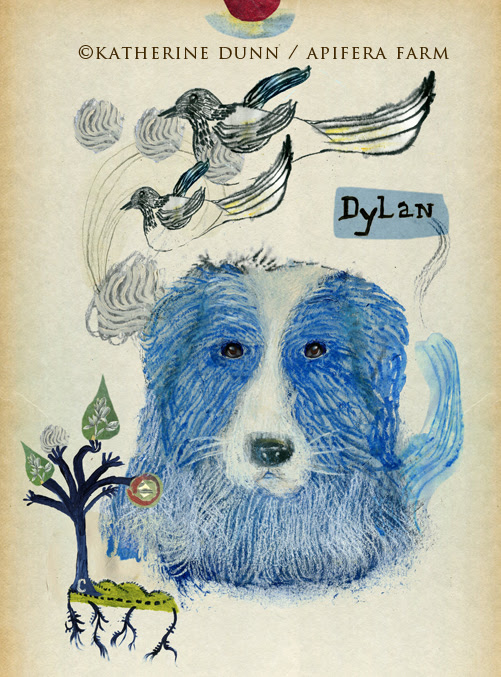 I just completed a commission of a client's beloved dog, Dylan, who is still thriving at age twelve but has entered his senior years.

I always ask people to write as much or as little about their pet before I create the art for a pet portrait. I have never failed to read something inspiring or magical in one of these brief bios - so many memories and so much love comes out from the human. In this case, it was the image of the magpies swooshing around, waiting for the soft fur to float in the air while Dylan's owner brushed him.

Sometimes Dylan will retreat and sit on the grave of his long time friend, Cam, and I felt he needed to be part of the piece too.

The owner was moved to tears when she opened the portrait and saw Dylan looking at her. I took that as a very good sign - when I was working on the art, as I always do, I just kept calling out, whispering really, for Dylan. I think when I got done I saw or felt that Dylan is in between realms right now - but he is still alive and well, he is just nearing his next float. I have done art of my own animals when I know they are nearing - or I think they are close - to the end. It is really more of a way for me to mourn the The art always shares some truth in it, I've found, some basic truth about our own feelings or fears, or the simple reality of the situation. It is one step to letting go, before the real letting goes is thrust on us.

I was honored to work with Dylan, and hope he has a lot more days ahead with his human.
Posted by Katherine Dunn/Apifera Farm at 4:20 PM