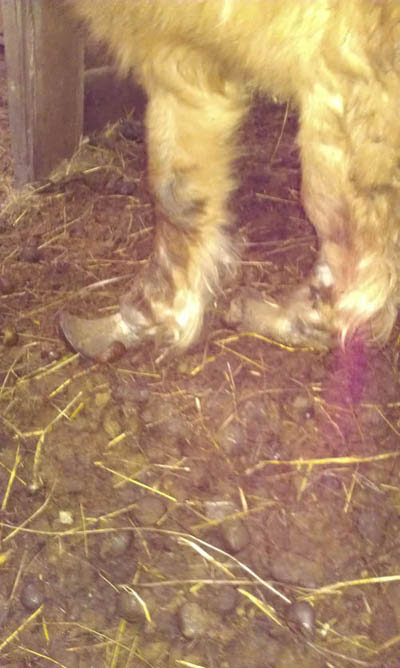 Apifera will be taking on two very old ponies [actually they are mini horses, but we all seem to keep calling them ponies including the rescuers, so it has stuck].

It is a mother and daughter, the mother is estimated to be close to 40 according to the vet. The daughter is in her early 30's.

Before I go any further- PLEASE - I won't tolerate any bullying/bashing of others on this page, take it elsewhere please. The owners of these two had life events take over both financially and in health ways that caused a slow but mounting environment of neglect. Not only was there living shelter dirty, the elder mother pony was bone thin and blind. Both were matted so bad they had to be clipped and manes/tails were cut. The daughter was, and is, overweight and her feet were curled as you can see from the blurry photo taken by the vet. This causes some crippling in her legs - she now walks oddly, but this may change with more time and feet trims.

The elder mother also had - WARNING this is GRAPHIC - her ears chewed off, supposedly by a coyote but none of us, including the vet who rescued her, believe this. We think it was most likely the family dog that was rather wild according to a neighbor, and he might have been playing tug of war on her. I have the photos of the day they found her, freshly eaten off, it's horrible and I contemplated showing it here, but felt it would incite people. These are not bad people, they just got lost. And they did call the vet when her ears were chewed off, which is when the neglect was discovered.

So one of my vet clinics operated on the spot on her ears and they are entirely gone now. She is about 90% blind. They got some weight on her but she needs more - her hips are concave still and she is still too thin. The daughter needs ground work - she is not mean, in fact once you start petting her she likes it, and children have hugged on her and there is no aggression. It is amazing that the elder with no ears still trusts dogs and is very sweet. They get along with chickens and goats and should fit in just wonderfully here.

We will need to float the elder mom's teeth and we will need some extra foot trims for awhile, and Cushing's meds, and special equine food. Martyn will help me get that new little out building built soon [a good incentive, as we had a kind donation last spring]. I will take photos on Sunday after their arrival!

If you'd like to donate a little something to honor their arrival, it will be appreciated. Or just send warm thoughts our way if money is tight. I hope I can help them back into shape so they can have months and or years in peace.
Posted by Katherine Dunn/Apifera Farm at 12:51 PM

I appreciate your imploring people not to be mean and nasty to the former owners. A lot of times people don't intend to neglect, they just get overwhelmed and lost.

awe I think it is so awesome that you are rescuing these two. I just want you to know that I found your blog a short while ago and your posts fill my heart with joy and laughter. thank you

when I told the story of my rescued dogs to someone who had two of his own, his words to me were: "they know they've be rescued"