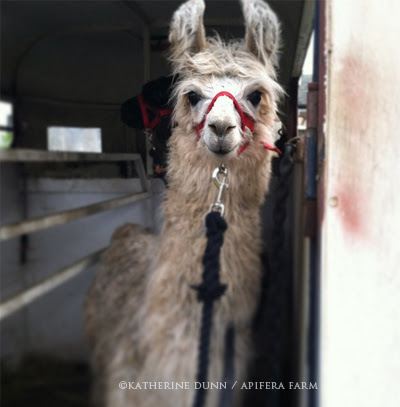 In the past months, we've been working on developing our upper fields so that we can graze the flock there and give our lower fields more of a rest. This means a lot more fencing, which is half done. It also means I get nervous about passing coyotes and other predators who can easily go under a fences. We've been hearing them more passing through. I still bring my flock in at night to be in paddocks by the barns or the house. And since Marcella is still a work in progress, and Benedetto is still a runner in process and I don't trust them completely yet, I decided to acquire more llamas.

Rather than get adults, I opted to raise some up. I found a great llama breeder nearby who also has sheep. It was a pleasure working with her to pick a couple youngsters out. I am still so new to llamas but find them very interesting. Aldo the Elder was adopted a year or so ago and while he defiantly knows sheep and guards, he is old and his pasterns have fallen. It would be inappropriate to put him in the upper fields. He does really love it when the flock is in the lower field where he can watch over them. Sometimes when he sees them up in the higher fields, he does his little llama whine, telling me he is a bit agitated his flock is so far away.

So, I came home with two 10 month old llamas. My reasoning-yes, I actually had a plan- is that I will put the male up in the upper fields with the flock. When the flock moves down to the lower fields, he will come along, but he will be separate from the female llama. The female llama [the white one in the photos] will stay with Aldo and she will eventually be separate from the black male. This separation will happen in the next couple weeks. I will have to castrate the male when he is about 15 months. I learned you want to wait to castrate the llama male due to growth requirements.

I really wasn't thinking of getting two llamas, but since the Maremmas are being problematic for me, I wanted to know that I would always have a llama in my lower and middle fields where Aldo is now. So when I went to look at the llamas, this little white girl was all lovely with me, and I thought Aldo would love having a mate again since he lost his long time partner to old age. The black male was much more skittish, which is fine. He is to bond with his flock, not necessarily me. I will have to do a bit of work in the coming two weeks though to gain his trust more. He leads very well and his former farm worked with putting halters on them.

We brought them home yesterday and they traveled just fine. The poor boy though was shaking a lot getting in the trailer-so many new experiences all at once. The girl is very calm, more personable. They led well into the orchard area and Aldo immediately rushed over, not so much friendly, as,

"Hey, wait a minute who is coming into MY area with MY sheep!?"

I let the llamas off their leads and there was no real trouble, but within minutes, Aldo retreated from them, which surprised me. But by day's end, he let me know, and them, that he was the lead llama, fallen pasterns or not! It is the first time I've seen Aldo spit, and he did so when the girl kept trying to make friends.

At the end of the day, I wanted to try and catch them both for some one on one time. This was problematic. It didn't help that the White Dogs stood at the gate barking. It became more of a lesson for the dogs, that these two odd looking aliens are now living here, no need to bark at them. I've heard no barking today, they learn fast. But when I did try to catch the two youngsters, I couldn't, and tried all my tricks for llama catching. The boy was getting stressed, and at one point Aldo tried to guard me from them, but then a minute later, Aldo spit on the young arrivals. So I quit for the night.

This morning, I awoke to find the two youngsters under the big Doug Fir out back, surrounded by the flock, and Aldo was nearby. Aldo is still a bit peeved at me, I'm not sure exactly why, I think because he saw me trying to round up the young ones. In time, I know the girl will tender up pretty good, but right now, I'm just letting them relax, there is time for separation and learning in the weeks to come.

The fiber from the male will be beautiful, so I will learn how to get a good shearer for their fiber.

I am awaiting their names, which will come to me as I get to know them better. 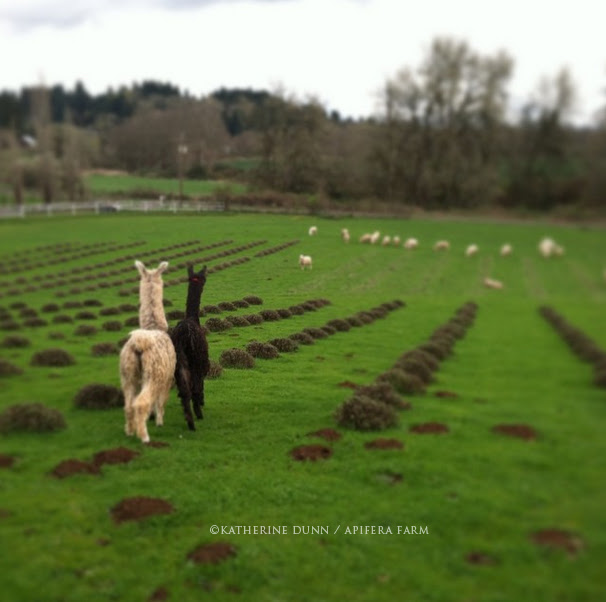 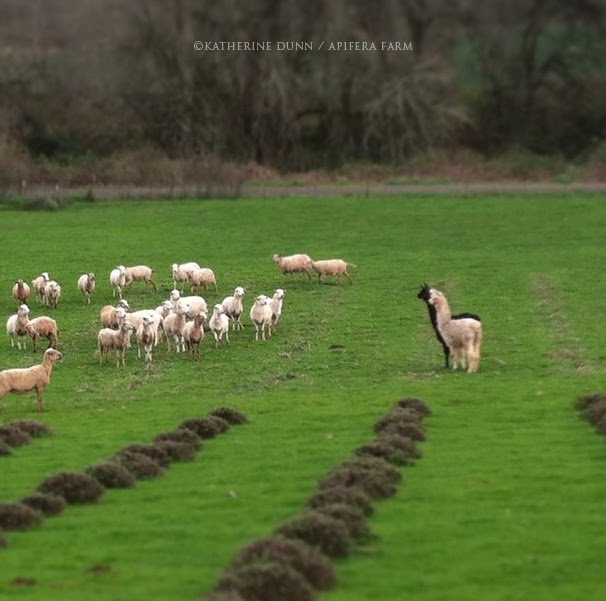 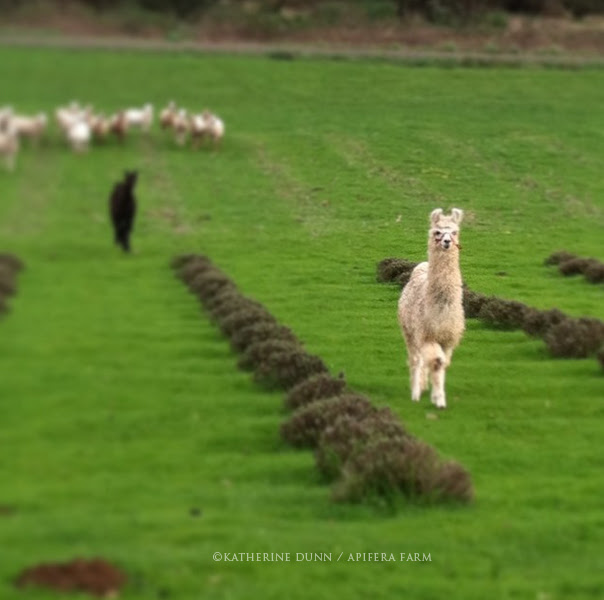 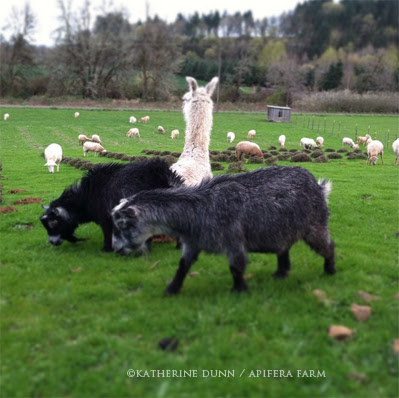 Email ThisBlogThis!Share to TwitterShare to FacebookShare to Pinterest
Labels: Life on the farm, Llamas of Apifera

You have a beautiful place. It's no wonder the aliens want to visit!

They are an odd kind aren't they? But so Suess like. I've never had any experience with them, good luck.

They are used as guards around here all the time. I talked to an owner once at a fiber festival and he said they were more cat like and aloof. Which is probably why they guard so well. Good luck with these two, it will be a pleasure to watch them develop. xox

Good luck to all involved! I will be honest. I comment a lot on FB because I love you and your animals and what you do, and I am so so sensitive that even just reading this makes me sad for Aldo....I am such a wimp. I know you know what you are doing, and the animals probably know everything! Your blog is brilliant, but I get sad a lot...it's just me. I love what you do.

The aliens had a good lesson tonight, and I was able to handle the male who is much more skittish-which is not a bad thing in llama world. Allis wel.. and Aldo is just fine.