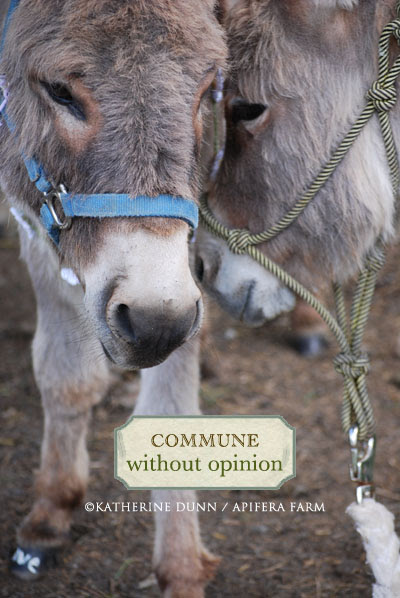 One of the graces of my life here is I have many creatures around me without opinions. I have many opinions, I'm sure you do too. Opinions are important, especially to the person with the opinion. With technology today, opinions come all day long. It's hard to look away sometimes, isn't it? I know many people that are irritated by so and so online, yet they continue to peek at their news feeds. I do it too. I hate it, but I do. Such a waste of time and energy. I have a note on my wall in front of me,

"What do you need right now?"

to help me walk away from that compulsive human behavior. Sometimes it works, sometimes it doesn't.

It seems some people, many with strong Facebook presences, take glory in their opinions to the point where they become bullies. And they are the worst kind of bullies-the ones that claim they don't tolerate bad behavior on their pages, but they turn around and act cynically to certain commenters. Some of those commenters might need a push out the door, but some are just sharing their opinions, or asking the wrong questions in the poster's mind. These same bullies that constantly shame commenters on their Facebook pages, can then turn around and are flabbergasted when that same person stands up to them-and the initial bully calls the commenter a bully.

Recently in an interview, President Clinton was asked about race relations in our country, and if he thought they were getting better or worse. Part of his answer resonated with me. He said part of all the problems in the world right now, including race issues, is we care too much about being right, not necessarily discussing issues and exploring facets of opinions.

My interactions with the animals do not require that we sit around and discuss politics or hot button issues- thank goodness, because you know The Head Troll would probably be right about everything. There is no right way for the goat to chew, there is no right way to dress, and the color of my skin or the sagging of it is not important to any of my gang. All the chatter of the outside world can be put in a box while I sit and do chores with the animals.

The trouble is, one still has to live with it and hone our communication skills, and our listening skills, to deal with online aggression and over shouting of opinion.

More and more, I just want to be. I want to paint, and create, and just do it. I love sharing to an audience. I do. I admit it. I see my work as a cycle-it gets created, but it is when it is shown to the outside world that it fulfills its own destiny. It is out of my control after that. It goes off and emotes whatever it has in it to whoever cares to sit in front of it.

I had a thought this past week that has kept coming to me. What if I just disappeared-socially? I lived unconnected before, we all did. Would I be like the tree that falls in the forest-if I wasn't sharing constantly, would anyone hear me? Would anyone remember to check in once in awhile? Would it matter?

It's a beautiful day here. There was no bully behavior in the barnyard at breakfast. There is a big blue sky of opportunity above me and paintings sitting waiting for my non opinion. I hope you might stumble on a donkey waiting to commune with you- or any other creature or human that might sit with you for moments of uninterrupted non opinion time.


Posted by Katherine Dunn/Apifera Farm at 11:37 AM

Email ThisBlogThis!Share to TwitterShare to FacebookShare to Pinterest
Labels: Donkeys of Apifera, Wisdom

Sitting with five right now. Wanting to just be as well. xox

i have that disappearing thought almost daily. i have, in fact, disappeared from all social media platforms....i only "exist" in a bloggy format these days. ;)

i have to say -- i feel much more peaceful in myself, not having the constant barrage of chatter and Busy and Do-More buffeting me at every angle.....

You just be, then Corrine! I just went for a lunchtime ride on Boone, perfect non opinion time! Thanks, Mel, I went to your blog and it is very nice and i'm very impressed with the many earth projects you are doing there so very good. You know, it's a conundrum for a businees owner or someone like me who makes a living solely on my art/writings/and related products. Before FB, I could do that from the blog and my galleries and my client list. That has changed and the two people I know who totoally quit FB did not run a business or freelance. When I've talked to consultants about this, it seems they come up with the same answer-it would be foolish to completely leave a major source of promotion [which for me, is basically what FB is, even though I might share personal things too. So, I'm not sure if quitting would be a good thing. I don't know. If I decide to, I will do it wholeheartedly you can be sure!

I love my dogs' company as they allow me to just be, and it's indeed a peaceful thing!

I've just recently joined fb and I may let it go. I don't think I like it much, for just this reason. Why do people think its ok to be such little sh*ts online & say things they'd never have the balls to say in person?

Katherine, I'd miss you very much if you totally disappeared from the internet. FB I guess I don’t care about, but your blog is dear to my heart.

Oh I'm not leaving my blog, it's my fortress, stage and cyber soul! And maybe if I left FB, it would force people to come find me...or not. Thanks, Kim!

The donkeys are good teachers.

I'm so glad to hear you're still going to blog. I've been following you for such a long time it feels like you're an important part of my life. You've so often inspired me in somany ways... to paint, to not give up, to get outside. I follow lots and lots of blogs, but yours is truly my favourite.
Kim

Aw, thanks, Kim, I so appreciate hearing that from you!

I would miss your updates. Yours is one of only three blogs I have to check every day. My personal rule is not to fight with anyone online and to just move off from meanies however I also don't put myself out much either as I'm sure bullies would make me cry. Glad you are staying with apiferia farm.

Thank you, ELizabeth! For reading and stopping to comment. I agree with you.I don't make as many 'likes' or comments either anymore, which is sad, and I think many people are getting more wary to openly chat online, which is alos sad. Maybe in time we will reach an online world in the middle.