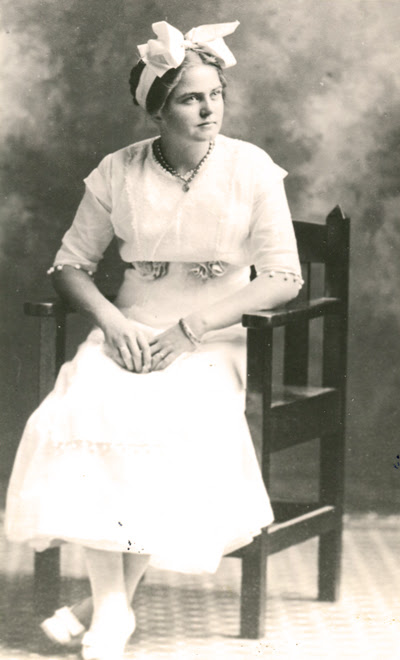 I was born this day fifty seven year ago, in 1958. That same day, my Grandmother Katherine died–she was fifty seven and left me with the name I now bare. I was supposed to named Bridgette, which really upset me as I was young since I thought Bridgette Bardot was fabulously exotic. I think I could have been a Bridgette, but Katherine is a well suited name for me.

Grandmother's photographs did not show a fifty seven year old-part of it was the era, the hair styles and clothes. And part of it was she worked full time as a nurse, helping start one of the first settings for crippled [the term then] children in Minneapols. She had three sons, one was my father. And when those boys were young pre-teens, their father left my grandmother for his younger secretary. It was a shocker for everyone, as he was a prominent physician in Rochester, Minnesota-a small town of wealthy doctors who all knew the comings and goings of everybody. Divorce was unheard of then, it was a black badge you wore about the town. She did not want a divorce and she carried a torch for my grandfather for many years. My mother told me a really heartbreaking story-a year or so after my grandfather left her, and was with his secretary living in Washington D.C., my grandfather paid for his young sons, and my grandmother, to come out to visit. He paid for everything and put them all up in a hotel. The trip just happened to coincide with their wedding anniversary so my grandmother was sure he was going to reconcile. But he didn't and he had cluelessly planned the trip without even remembering the anniversary. I can feel her body sinking that day.

I was never told about the divorce until my twenties. My parents thought it would tarnish the image of my grandfather in my mind, and they didn't want that. Each year I'd get books for Christmas from my grandfather, and sometimes I'd go visit him in Washington D.C. I did not like my step-grandmother. Nobody did. As my grandfather grew elderly, he invited me out again when I was 17. He hadn't seen me for many years and he kept accidentally calling me "Kappie". This was my grandmother's nickname. He would sit and talk to me, with this adoring look on his face-and he'd slip and call me Kappie. This riled my step-grandmother. But I liked it, as I had grown up thinking of my real grandmother as a mystical creature-one I was named after, and had many similar traits too. The photos I had of her when she was a young woman showed angelic but strong beauty-in my young mind. I'd examine her face, wondering if I could be so lovely someday, and brave. When I turned eighteen, I was given her wedding ring by my father. I cherished it and wore it every day on my right hand, until I married Martyn.

I think of my grandmother a lot, and how she died at the age I turn today. It seems so young, even though back then fifty seven was more like seventy plus. She had diabetes and had a stroke on the cold Minnesota morning I was born, falling to the sidewalk while she waited for the bus to take her to work. My father told me after I was older that he had been called to the hospital and was told that at the scene passers by didn't help her, they thought she was drunk. It haunted him his entire life, and it does me too, that maybe she would have lived-who can know. If that had happened to my mother-I am not sure what scare it would have left-so the older I grow, the more credit I give my father, with all his flaws, to have gone on as well as he did after that.

The juxtaposition of my first day of life with my grandmother's last never fails to capture my imagination. The upheaval it must have caused everyone. But it reminds me of life here, and it helps me feel how my father might have felt. A lamb is born on the same morning an old goat falters, fades and lays its head down one last time. It happens everywhere in the world over and over-light and dark, salt and pepper- come in quickly without choice. Without the upheaval of death there wouldn't be life. It is the only way of nature. A tree seed bursts though the dirt, destroying that smooth surface of ground, to sprout its new trunk. We don't mourn that, we notice the sprout. Somehow I've grown to see death this way-it makes room for other things that might be looking right at us.

I don't want to die on my 57th birthday. But I'll share something. I do think if it all came down to one moment like she had on that street, I think I might take a deep breath, and rest. I plan to go on living, and will relish it, but life does begin to take small chinks out of the armour. These chinks don't make me sad, they just make me realize that the last breaths might be a soft, gossamer piece of relief.
Posted by Katherine Dunn/Apifera Farm at 5:00 AM

Happy Birthday Katherine. Thank you for telling this story, it touched my heart. Wise is the person who would surrender to that last moment and live fully within it, rather than rage and resist.
Kim

So much in your story ... my mother's mother died at 49 and I remember the day I was in the doctor's office, answering yet again the same questions about family history and realizing I was an age my grandmother never knew. It is an odd sensation, those connections. I love that you might have been a Brigette!

I hope today finds you receiving many birthday kisses, sunbeams and brays! xo

Happy Birthday, mine was Saturday fellow fish. I turned 59. My Mom died at 57 and it freaked me out when I turned 57 that maybe that was it. Would I go too. Obviously not, but I don't take any day for granted. Hope you have a marvelous birthday. Great story about your Gran. xox

A beautiful meditation on your birthday, dear friend. Much love to you, this year and always.

Tonight my daughter bought one of your postcards at a store in the Chelsea Marketplace inNYC. When we got home she read the back of the card and we have been looking at your website and reading your story. We felt compelled to send you a birthday wish seeing that today is your birthday , the day we came upon your work. Hope it is a happy and healthy one and you are blessed with many more. Perhaps we will meet on Pino Pie Day.
best wishes
Janice and Margot Solomon

Thanks so much everyone! Janice and Margot- I absolutely love hearing stories like that-and how a big world is smaller and we can connect like this-thank you, a real birthday gift for me.