Eerie journey through the woods of light 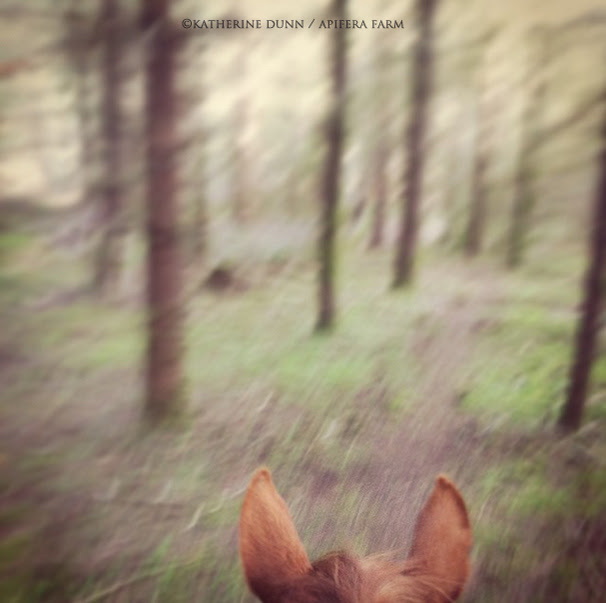 Yesterday morning I went for an early ride, alone. I am very fortunate to have access to my nearby friend's land with riding trails, free of cars and wandering dogs–although we run into an occasional critter, as there are many living on the 200+ acres of property-all in protected lands.

I know there is the occasional cougar up there but have never seen one. It's ridiculous to think they aren't there, as it is high up, remote and the males have large territories. I have always been afraid of cougars, having read some bounty hunter website when I first moved to the farm that scared the britches off me. Coyotes I can handle, bobcats, hawks, eagles–but I've always felt if I ran into a cougar that would be it. I've heard differing opinions on this, but what most will say is you can't outrun them, and you can't lay down for them. One hunter told me that they are always looking at me if I'm in a remote wooded area. The area where I ride is country, but there are properties of 100 acre parcels around, cow farms, sheep breeders and horses, and of course- filberts, orchards and grapes.

My riding friend had an incident where her very seasoned horse became very agitated on a solo wooded ride. She respected it, and they headed back to more open trails. My other friend was hiking in this area and knew the land well, but it was nearing dusk. She said she had a 'feeling' on the back of her neck, and knew she was being watched by something, and decided to head back since it was getting a bit dark.

So on my ride yesterday, I was pondering how many creatures might have been watching me and Boone. Boone is a very good trail horse. When I bought him, the man told me he was sure footed-which he is- but also that he was very attentive but not in a high strung way. Anyone that knows Boone knows that "high strung" is his opposite! On trails, Boone will often stop, and watch. I allow this-as I feel it is his personality and instinct. Sometimes I know it is a trick to eat grass, but when he stops in a certain way, I assume he is sensing one of our forest friends.

We entered the woods, a nice trail, somewhat spooky but in a beautiful way. The light was exceptionally eerie yesterday-maybe it was my melancholy mood. Yes, it was my birthday, but I was a bit blue. I had certain people on my mind that are aging and failing, and I felt a huge void for my family that are mostly gone now. As wonderful a life as it is, I just felt sad yesterday, sort of like I could feel as a little girl when scared. I felt vulnerable.

As Boone and I rode, I sensed there were many messengers in that forest with me. I don't like to combine technology on many of my rides-but I did take my phone out to capture the light if possible. I did not alter these images but when I got home I felt it was a document of that forest being alive-both in reality but also in a spiritual sense.

When I got home, I had a letter from my only surviving Uncle, my mother's brother. He is a wonderful guy, and health issues are catching up to him and his wife. He always remembers my birthday. He is the final blood elder who will be in my life. He told me he was looking at a photo of my mom as he wrote the letter, and that he too missed their chats.

I think that was my sadness in the forest. It was my sadness, but also the sadness of my Uncle and maybe my mother knew it and just wanted everyone to be okay, she is okay, she said it through the branches in the wind. The light of the forest seemed like the sadness we face after we lose everyone, and the weight it takes on all of us, especially the last remaining elders who are still at the party with one foot in the room and one out the door. But when I looked up through the trees, there was sky, a different kind of light, a light of life here on earth. 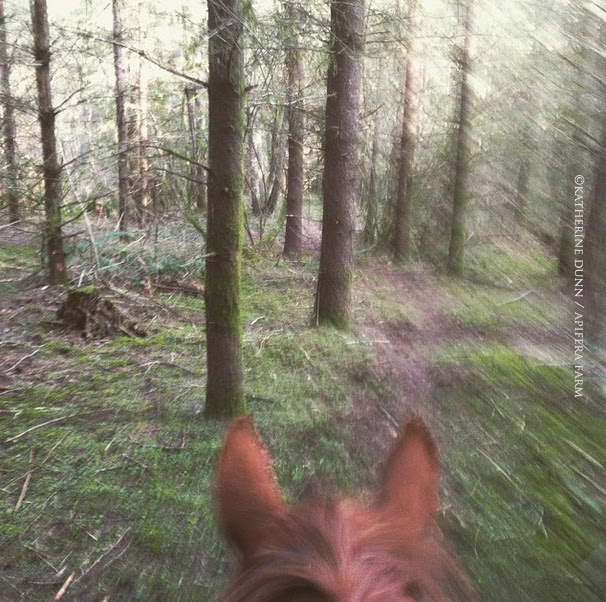 So beautifully expressed...Happy Belated Birthday to you.

I get those feelings too on my birthday. I suppose its partly coming to terms with our own mortality as we age and partly memories of days gone by. I always think of my sister who i lost 3 years ago because she would always be the first to call and a card would always be in the mail from her.
I saw a cougar once about 10 feet up in a tree on my dog walk at dusk. At first I didnt really think it was a cougar, just a big cat...oh yeah, a REALLY big cat! When I went back to have a second look it was gone and I knew it was watching me from a different spot. I often think of what is watching me too and hope that is all they are doing...respecting me as I do them.
By the way, Happy Birthday!

Thanks for stopping by Sherri. I love your photos on Instagram!

Kerry- I'm sorry you lost your sister. I only have one brother and none of us have kids so it really is the end of the Dunns! I know - not getting a card, it hurts, I have to say. I would just be beyond something if I saw a couger in a tree. Glad you pup was on a leash.

What a beautiful post. I can always tell when there is a coyote near the river because Ella, our red heeler mix lets me know. Our companions are so in tune with natural rhythms. I am no fan of cougars either, kind of glad we don't have them where I am. I am trying to practice listenong more deeply to all the whispers put there. Love your misty photos. xox

i feel the same way about alligators that you do about cougars -- i think maybe there's some ancestral memory there, or something. truly, the thought of being anywhere *near* an alligator makes me paralytic.....needless to say, living in Florida for a while only heightened that terror. :) thankfully, it's not likely i'll cross paths with one here in Ontario.....;)

i love so very much what you've written here -- i recently lost my beloved Nanna -- i know exactly that feeling you describe of the forest holding your sadness....