The barnyard's graveside service for Stella 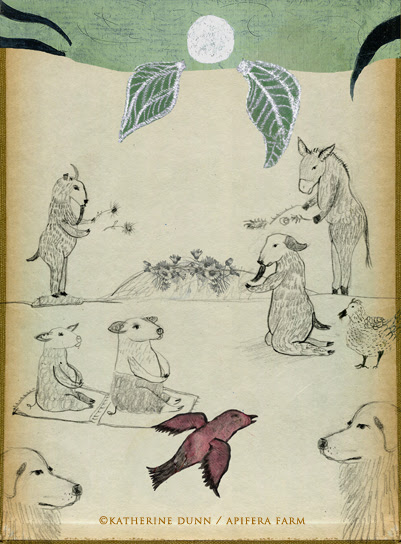 I did not attend. It's not that I wasn't welcome, but I've learned that the barnyard should be allowed to have their own good-byes, as they see fit.

I had not been informed of a time anyway, I think there was just so much going on in the barnyard last week–Henrietta's illness and death, Earnest being ill all week–that The Head Troll wanted to keep it simple and dignified. This can be problematic when you are dealing with the likes of Moose, Goose and Wilbur the Acrobatic Goat, and a grumpy pig.

So when I looked out the bathroom window this morning while I was brushing my teeth, I noticed some figures gathered at Stella's fresh grave. Martyn and I buried her in the lavender field yesterday, mainly because we had run out of room in the pumpkin patch. Stella was never allowed in the lavender field, so it seemed appropriate to lay her to rest in a field she would have loved to have escaped in to.

I saw the touching scene of Iris, who had lived her whole life with Stella, kneeling at the graveside. She was placing teasel weed on the grave which was adorned casually with dried leaves and debris, and some English Daisies that are blooming right now. Pino was there representing the equines–it's a known fact that of the donkeys Pino does better at graveside services–Paco gets weepy, Matilda gets unsettled and Lucia just can't stop fidgeting. Earnest, who seems to be back to normal, sat politely with Eleanor. The White Dogs kept guard. Edmonia Lewis represented the hen house.

They were only there a short time, maybe 10 minutes.  I could tell the The Head Troll was speaking but couldn't hear. Then they all left, except Iris, who stayed for a while longer, touching the grave. She got up to leave, walked a few steps, turned back to the grave....and grabbed as many weeds in her mouth as she could.

Later that morning, I asked around, if anyone knew how the service went.

The Head Troll read a poem about apples and how good they are and how lucky Stella was to have had a life with apple trees, said Earnest.

Eleanor rushed in, excited to tell me,

And we saw white wings in the sky as we left!

I wanted to tell her,

Yes, that was her for sure, she's of Nature now.


But everyone was out and about, getting on with the day, content.
Posted by Katherine Dunn/Apifera Farm at 1:49 PM

Email ThisBlogThis!Share to TwitterShare to FacebookShare to Pinterest
Labels: Art, Rest in Peace, Stella and Iris

White wings in the sky, that is a beautiful image.

Like Terra said, what a beautiful image, she is part of nature now. xox

Thanks for stopping in you guys, and also to the many messages on FB-it was a sad day in deed for me.