From this will come huge things 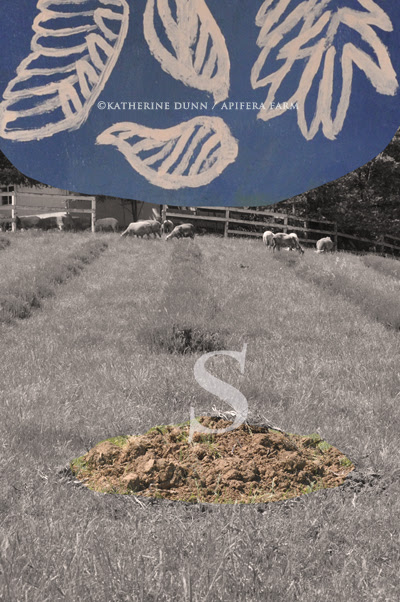 Some animals that die leave bigger markings. They all leave some dent in the landscape, and all are to be remembered, but some leave much bigger heart prints.

Stella was one of the latter.

I see her grave as I drive up the road. She is buried in the lavender field, and I don't see it as depressing at all to see the fresh dirt mound knowing what lies beneath. I just think,

She had such a good life. Someone noted that there are many changes rumbling through the farm. It is true. We have been here 11+ years now, and there are bound to be shifts in Apifera's life. I'm okay with all that, excited too, now that I've announced this will be the last Pino Pie Day. Losing one event will free me up to create another, another that will be more in tune with the current Misfits, my writing/books and art, and my new hopes and ideas-and new muses I haven't met.

Stella's death, the passing of the farm's matriarch cat, the new barn, the shifting of the lavender fields, the opening of upper pastures, all of it signals change which means new stories, adventures, art and dreams. I remember when my mother died, as drastic as it felt, a voice came inside me and said,

From this will come huge things.

I've lived within one part of a dream for many years now-the dream of finding a mate, a sense of place, a horse and farm-and I will continue to admire where I've landed, and not take it for granted. But unlike some people I see who get stuck in their dream, hoping it continues to bring them glory, comfort, more book deals or continued public adoration, I'm going to stretch and allow myself to jump off some tall trees knowing I might scuff up my knees at times.

I have loved being within this current dream, but my wings aren't clipped.

Several months ago, maybe even last year, I began titling paintings with "Calling All Wings". My titles come to be subconsciously after a piece is done and I knew these had a many layered muse behind it, and that muse is now coming to the forefront.
Posted by Katherine Dunn/Apifera Farm at 3:11 PM

Email ThisBlogThis!Share to TwitterShare to FacebookShare to Pinterest
Labels: Stella and Iris, Wisdom

Change is always a challenge but obviously you know how to embrace the next chapter. Freeing up yourself for other things means following your passion which clearly is something dear to your creative side but more importantly your heart.
On a sidenote: since you have so much experience with injured and sick animals, could you have a look at the latest post on my blog? I have rescued a stray kitten with severe eye infections. I have been to the vet as you will read but wondering if you had any experience and if so what kind of home care did you do? So much appreciated! Sorry I missed all of those pie days!!

they say change is good. i'll be watching closely. i always tend to take the safest of all routes in life...but that's changing too, so here's to flying high, and to new places.

Kerry I visited your blog and made a comment-commend you for trying to help that kitten. Change always leads to something, whether we think we need it or not, and I guess, for me, it's the only way to look at it, otherwise each day would be misery if you let unexpected changes ruin your happiness-not that one can't take time to acclimate or mourn with unforseen changes. I'm not really the best at letting go in a timely way, but once I do, I do.