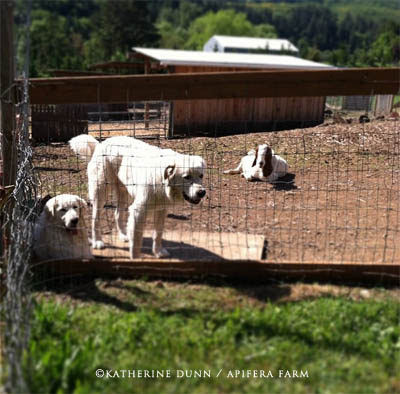 I was reminded, yet again, of the constant juxtaposition of life and death in our daily wanderings. Stella is fading, unable now to get up without assistance. Sometimes she can, but her front legs are now weakening too. I wanted to get through this weekend's book event, and Earnest's fevers, and hoped I could before making a final decision on her. It is the right thing to say goodbye to her soon. More and more, her face tells me and I suspect it will be next week sometime. In the meantime, I spend a lot of time with her, checking on her, helping her from the sun into shade at a certain time of day, holding her-she was always more affectionate than Stella. I have to grasp it all, that she'll be leaving us, one of our founding members, a muse, a friend, a clown. The dogs sense her condition. But they still romp around about her, making her life even more precarious as she will collapse from a light breeze it seems. I found them lying near her this morning, a sweet image to hold in my memory.

Martyn was up early as usual and out and about in the barnyard. He came in around seven and while I was still half asleep, said,

"You know that black hen in the old barn?"

"No, she has about 10 chicks with her this morning in the donkey paddock."

Well, I can't say I was happy. But, there is always an excitement with new babies of any kind. Still, my mind percolated what to do–let the hen be-she is a Bantie, a fiercely protective mother-and run the risk of Nature taking some of them.

I opted to intervene and put the chicks and surrogate mother in the Nursery in the coop. Once I saw them-eight in total, I couldn't stand the thought of any getting taken by a hawk, and there were already hawks circling when I did feedings. Perhaps they already nabbed some, I found her sitting on them growling outside the old barn this morning.

Obviously the hen did not get the memo that I just bought 8 new chicks from the feed store. So now I have three batches in the nursery. It's so much fun though to have a hen in there, sitting on chicks, protecting them with her wings. The one month olds are definitely aware that Mama Hen means business and nobody is going to harm those chicks. I was tempted to open up the cage of the 4 one week old chicks, but I'm not sure mama hen would bond with them and then they might get run over by the older chicks. Problematic. It will be fine-so far everyone is doing well and I can tell some of the chicks are banties and some are Aracuana crosses. There are five hens that broke off of the flock and they live up in Old Barn with Papa Roo, our oldest and original rooster, a Bantie. So I know those are the mothers.

I'm sure there will be more roosters. Dang. I have three roosters. Perhaps this is why the universe took that one day old Buff Orpington rooster from us. 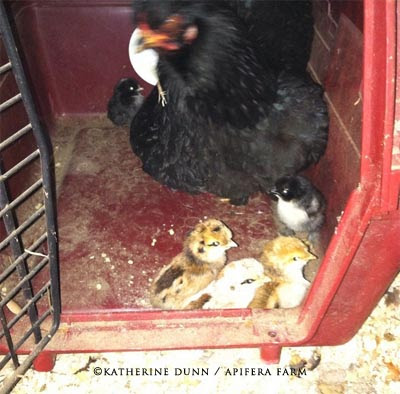