Love returns with a one eyed pug 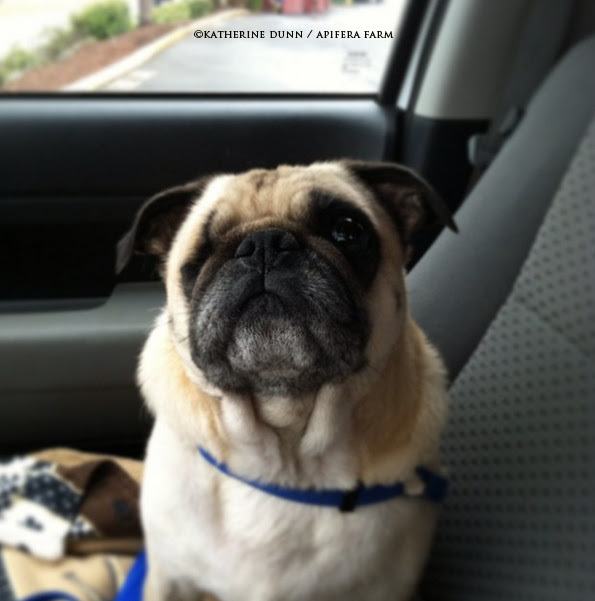 There was a part of me this past week that felt that the universe was taking away things to make room for what was needed. I have been telling close friends that things are shifting here, I am accepting some new visions for the coming decade. There is a reason this old pug came to me, and it was part of that 10-year plan, he just got here sooner than I thought.

It all happened in a day.

A friend sent me a link to a cross posting on Old Dog Haven...of an older one-eyed-pug needing to be rehomed. I make a point never to look at online ads or rescue sites, for many reasons.

I gasped. Then sighed, then stepped away to do chores. I had made a plan to have a pug again, and always swoon at photos of friend's pugs online, or when I see one walking somewhere. But my plan was to wait until Huck passed, so only two dogs would be in the house. Huck is ten and I hope to have him with us for a few more years if he's able. Muddy is five. I had felt that Huck deserved to live out his final years without pug puppy torturing him, but had never considered how an older pug might be a delightful addition for the elder Huck-and this is seeming to be true as the new-old pug is settling.

But it just seemed too much of a fit, too much a gift–especially after the last two weeks of saying goodbye to so many creatures one after the other. So I emailed and got in touch with the current foster mom, an elderly woman who had been caring for the pug for a few months, and adored him. Sadly, she felt it was not in the dog's best interest to keep him, because she was very unhealthy, arthritic and had trouble lifting the pug-and because the pug is totally blind, he needs to be lifted at certain points. She wasn't going to give him to just anybody, and wasn't in a hurry, but when we talked she knew she had found the right person.

So I organized a Pug Pickup with a good friend to Apifera, who agreed to drive from Seattle to Bellingham [2 hours] and then down to Tacoma [3hours] to meet me. It really helped me out as I could make the round trip 7 hours in one day, and alone. She has also hauled a goat down to me and is just a love. Thank you, dear Lisa.

The anticipation-even though only 3 days would pass before agreeing to take the pug and getting him-was so great I had heartburn and was even emotional at points as I made the drive. I knew of course this was not Billy, it looked like him, that's for sure, but I knew I was not bringing home my old dog. But I was so excited, so touched to be able to have found this pug. He's nine years old but in very good shape. His teeth seem good and even though he is blind he is just a trooper, but very calm and polite. And quiet so far-unlike the original One Eyed Pug who snored liked a pirate and farted like a squeaky toy [constantly]. The gas passing will most likely come when One Eyed Pug II starts eating more normally again. His given name is Hughie and so far we are sticking to that although you know what happens around here-I'm sure he will have many addendums to his given name.

Hughie arrived with his own luggage-blankets he liked, a crate, a cushy bed, his favorite toy, special treats and food. He even has a special dog tag that says, "I am blind". There was also a touching letter from the foster mom, who wrote everything I'd need to know,

He likes his chin scratched. He barks at trucks but knows the UPS driver. He likes a little bit of turkey, but in tiny bites.

He slept by our bed last night as a trial run. He had slept in the owner's bed in his former life, but I was not going to allow that. We already sleep with two cats on our heads and its unfair to Martyn-and I like my bed, it's our bed, our boundary. I had his crate ready in case, but he slept all night without fuss. Morning rituals will be a bit complicated-Martyn always gets up early and feeds the dogs, but I will be in charge of Hughie, he needs someone to be with him since he is so blind. I might try to redo the back so I can leave him safely for 15 minutes. And what snoring he did was very civil. Martyn snores like a freight train. This was a relief since I have one on my left and one on the right.

What is really sweet is to witness his personality emerging as he settles, and he and the elder statesman, Huck, played a bit this morning. Itty sat up on a chair watching. I'm sure each animal smells different to another, so they know this is not Billy. But you wonder their thoughts. Both Itty and Huck were close to Billy-he was nursemaid to the then 1# Itty when we found her, he was hospice nurse with them during lambing. Itty seems enthralled, but has so far not gone to Hughie to be suckled like she continued to do with Billy through her adulthood.

I'm really exhausted. All the trauma of the last weeks-caring for Earnest the pig [who seems to be back to his normal self, thank the pig gods!], trying to help the prolapsed Henrietta and having to put her out of her misery, losing baby chicks and then care taking the surprise clutch of one of the Banties, losing a Bottumtum to an eagle, and then-losing Stella. So today, I took extra time with everything. I made banana bread to warm the house and give the new-old pug the scents of a good, nurturing home. He's lying near me as I type, in one of the original One Eyed Pug's mini beds, snoring lightly, with Huck at his side. 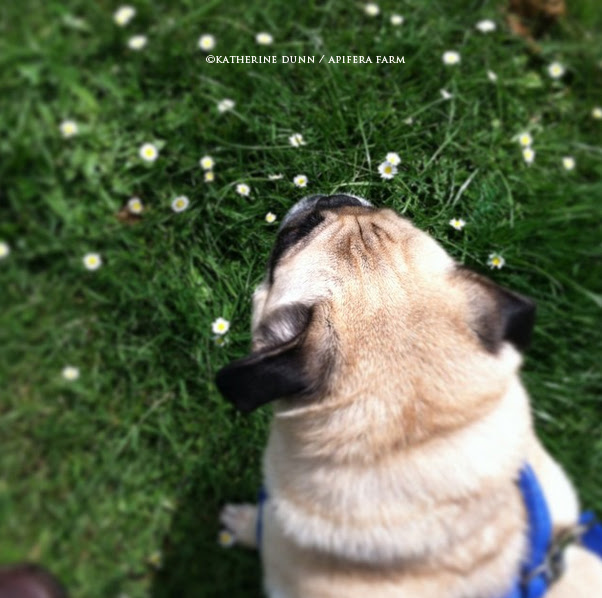 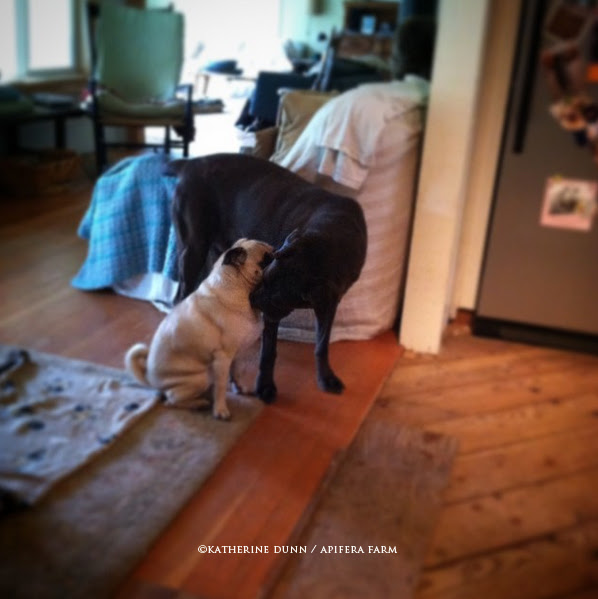 What a sweetheart! He knows he's landed in a magical place, and already seems at home.

I'm sure that one sniff of banana bread baking made his little heart leap, and he knew he'd found a wonderful home!

Heart thumping in happiness. He looks so sweet. He's lucky now, oh that he is. You too I suspect. xox

My mom, Carla, had Hughie for a few months. I referred her to Old Dog Haven. She told me about your website. I am very happy to see pictures of him! It's great he gets to be with you, the other animals, and to be outside in the great outdoors. Thank for giving Hughie a home.

tonja- that is so nice to hear from you. I know how much Carla loved him-he is happy here! I just spent the evening with him, first on my chair by the fireplace [and my heating pad] and then, on the couch watching a movie. He is a terrfici little dog! I am so blessed to have stumbled on him. He is getting along so well, and is quickly adapting to the layout. i just adore him.

Yay! That is so good to hear. I'm glad he is content, happy and that he fits right in in with the family. :)