Plum does his final walkabout


One of the hardest parts of living with semi feral cats, ones that are born in bramble behind a barn and make their life just fine living outside, is that they often don't say good-bye, at least not in the human way.

Mr. Plum has done his final walkabout, it is for certain now, as he has not been back to his front porch for over four days. Three days is usually the limit I give myself before I let go. There is a bitter sweetness to this loss. On the one hand, I am very sad to see him go, he is twelve years old though and has lived a long, good life for a barn cat-as did his litter mates. But on the other hand, he has died on his land, his home of twelve years. He is with his kin. And I don't have to stress him with a move to Maine.

You might recall that a month or so ago I wrote a post about Plum. I had told him not to worry about us moving to Maine, that I would not abandon him. I also knew he was very content here, and this was his home, his siblings are all buried here in one way or another as is his mother. To take him in a crate for six days and then acclimate him, at age 12, would have been hard on him. He was a very loving cat, but very independent. I could pick him up, nobody else could, and while he didn't want to be held for long, he liked it, and always came up to me in the morning.

Just a couple weeks ago, I sat outside with him while he ate dinner, stroking him. I was able to even medicate his ear which had mites. I told him I was still planning to take him to Maine, unless he decided otherwise. I guess he did. So, I'm relieved for him, and me I guess. I am so glad I could do one final care taking for him and help his ear.

But I do miss him. Since Little Orange went on his walkabout not too many months ago, Plum was the left on the porch, with Peaches. Plum had his own boudoir bedroom with cushions on the deck, ample blankets and food twice a day. He could sit on the porch near the windows and watch us by the fire. Sometimes I'd open the door and offer him a quick visit inside, but he never took me up on it. His home was on the porch.

I know he's gone. But I still find myself looking into his boudoir. 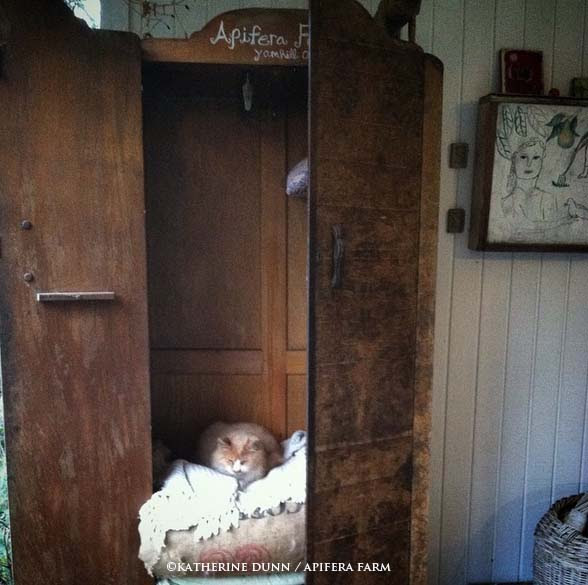 Posted by Katherine Dunn/Apifera Farm at 11:54 AM

Beautiful last words for Plum. He lived and passed his way. Onward, Plum.

Oh, so very sad and so very beautiful. So hard to let them go. xo

I hope the mean country dog did not get him. However, having had several cats over the years they do wonder away at the end. To be alone, I suppose. Love to Plum and to you! Marylin Huskamp

Well he made his choice and the thought of him with his kin is surely a comfort. xox

I remember well your recent post about Plum, it was so endearing. RIP Plum. xo

beautiful is so many ways.

thanks everyone....he had a good long life.