All day worry over Boone, but all is well 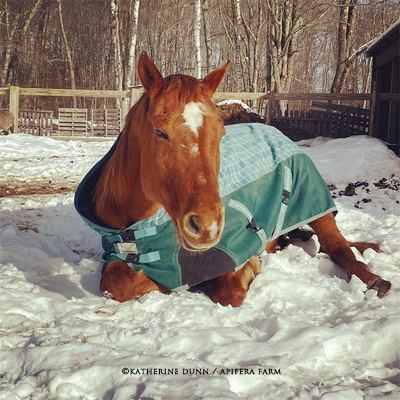 If you own a horse, you know the dreaded word–colic. Of course there is mild colic akin to a tummy ache, and then the kind that makes a horse owner shudder-impaction and severe colic.

So yesterday afternoon I went to barn early for chores and found Boone had come through the gate inside where I had some Sand Clear–a product we give seven days in a row one week out of the month. This helps keep granite dust out of the gut, which can lead to colic and bad things. Our main paddocks by barn are all granite dust which is great for mud control, which is great for keeping feet healthier [we suffered through very bad White Line disease with paco when we arrived], but it can also be ingested even with buckets.

So I must have not latched the chain properly. Yes, this is all my fault. There he was with the 5 gallon bucket wide open, the pellets all over-no telling how much he got.

Last night I dreampt I went to barn and old Matilda was lying on ground, almost dead, clearly dying. I had no way to save her in the dream.

So I woke up and got right to the barn, haunted by the dream and worried about Boone. And there was Boone standing in the sun, but he wasn't coming to the gate as usual. He looked dopey. I took his grain out [Boone and old Matilda get supplemental feed] and he didn't even come over. I knew he felt crappy. He then looked at food, and turned around, went in the sun, and lay down [the picture here]. When I touched his belly he put his ears back, he clearly was uncomfortable. I did the skin test and he wasn't dehydrated and his inner gums were good. I really knew in my heart he probably just had a bad tummy ache, kind of like eating 5 pizzas, but then when he did get up, he pawed at ground-another sign of discomfort. I decided to try and walk him in the outer paddock, something to do in colic cases if you can, to keep them from twisiting a gut. He went a bit with me, but he was clearly uncomfortable.

So I got banamine in him. My dang thermometer wasn't working right. I watched him awhile, banamine is for pain but also is an anti nflammatory and takes about half hour to kick in. I waited around longer than normal and he was up, trying to nibble on hay. He didn't drink for me. I called the vet just to make sure of her thoughts, and I had done the right thing, but we agreed if he was still uncomfortable later in day-or if he worsened-she wanted to come out since there is a storm coming tonight. It's an hour drive for her and that made me feel loved and not alone. I checked him on and off all day and he wasn't terrible but clearly felt icky. The fear was that he could be impacted-the Sand Clear is a pellet and is all fiber, so it can expand.

Well, tonight I went out early and he was at the usual spot, and he knickered to me-I was the happiest girl in the world. He proceeded to eat hay in normal fashion and...wait for it...he POOPED! He didn't mind me touching his belly either. I called my vet and we were relieved. I'll keep my eye on him though and hope all is well in morning. But it was a relief.

My day was consumed with that, errands and dealing with internet issues so I was on phone all day with techs. I got little else done, but Boone is okay and that is all I care about.

Email ThisBlogThis!Share to TwitterShare to FacebookShare to Pinterest
Labels: Boone

Yay for Boone and for you. Boone is such a pretty chestnut color I must add.

He was good this morning too , back to his old self, PHEW! I am a sucker for chestnuts and gingers!