Kids, don't try this at home 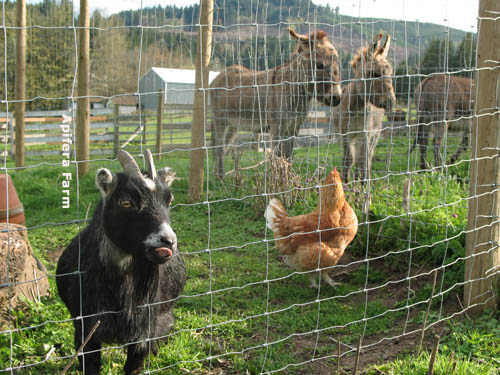 I've told her a million times, "Frankie, eat the weeds on the inside of the fence..." But nobody around here ever listens to me, except maybe Huck, or Pino. I guess Rosemary the head ewe does.

Anyway, it was one of those days last week when you wonder what's going to happen next. I went out in the early morning to find the front door window on the hen house smashed, with Vivienne outside, happily seeking worms and such. No one was hurt, and I can't really figure out what happened. I think someone got antsy, since the the old fart farmer girl [that would be me] slept in - heaven forbid. Within an hour or so, after I was contently working in the studio, I notice everyone hovering in one spot in the vegetable bed area. Hmmmm, this doesn't feel right. I suspect the masses are up to no good. Out I go only to find Miss Franklinia, aka Frankie, stuck in the pasture fence. 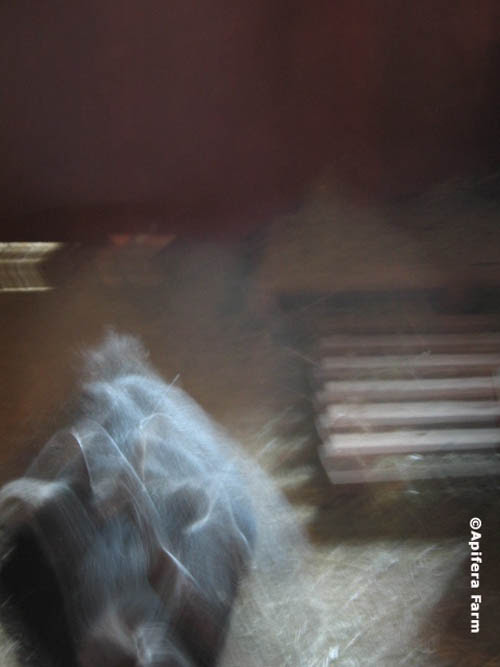 Many owners ago, Frankie's horns were cut off, terrible as it is. They should have been removed properly, but it is too late now. She can do magical things with those cut off horns - she uses them like cherry pickers, swiftly opening any gate that is not tethered properly. Fortunately Frankie is a homebody, and knows the best way to conserve calories is to lay in the sun as much as possible, and then make one mad dash to the hay bales when I open the gates in the morning.

So I arrived to rescue the little queen, and heavens, she was really stuck. "You got in here, we have to be able to get you out...". She patiently waited for my commands, "Frankie, pull..." but she did not budge free. After about 15 minutes, Martyn happened out to the goat-in-a-fence mishap. He pushed from the front, I pulled from the tail...no go. There was no other way, it was time for the wire cutters. Free at last, that little goat ran straight back to the barn, full speed, it was so funny.

Later that day, I returned to do night feedings. But Frankie had a head start on me. Someone with the initials M.D. forgot to secure the hay area. Ah well, have you ever seen a pygmy in action...here's your chance.
Posted by Katherine Dunn/Apifera Farm at 6:05 PM

Email ThisBlogThis!Share to TwitterShare to FacebookShare to Pinterest
Labels: Frankie, Goats of Apifera, Life on the farm, The Head Troll

i just love hearing about the goings on around the farm. I just clicked the link for the "breeding stock for sale". I live in Los Angeles, until October, then I'll be living in rural france for a year. But I would love to have a farm with sheep, goats, donkeys. It brightens my day to read about the happenings on the farm. Thanks for the smile.

My husband just said that goats look satanic...i don't see it i think goats are so cute....but he says that are trippy looking. hum????

I am so constantly amazed at how many paintings you do. Just one beautiful, incredible art work after another!!! I just wish I could be so prolific!! Your art just truely amazes me.....every painting and creation is so beautiful. I think your work is so fantastic partly because you have such a beautiful, inspiring environment to work in....surrounded by all your wonderful animals, lavender and just such a blessed life! I am so happy for you and you help me to believe more in that life style, too!! I still just love your artwork most of all! It's just incredible!!
Debbie

Thanks for stopping by Alisa- I loved the kids art on your blog today - wonderful! I had a picnic with my father in rural France back in 1983 [oh my!]. Bread, cheeses, wine, and other goodies. The food is wonderful there. Good cheese. Lucky you - want an adventure.

And thanks, Debbie, for the generous comments. I have slowed down a bit in production, but I remind myself everything I do here continues to be creative, and there is so much creative energy in one body!

Poor Frankie! The photo and story made me laugh- it reminded me of an unfortunate childhood incident in which my neck became stuck between the wall and the banister of our family's stairwell.

My poor freaked out parents tried oil, then vaseline, and lots of tugging- but my jaw was in the way, and none of it worked. Finally, neighbors showed up to help, and with much laughter, unscrewed the banister from the wall.

I feel a lovely comraderie with Franklinia *grins* Thanks for making me smile- I love your stories and photos.