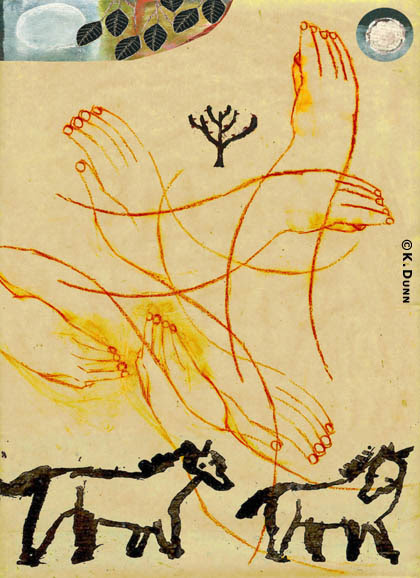 About this time of year, when lambing season has settled a bit, I begin having heart palpitations around my horse, Boone. This is nature's way of telling me it is time to get in the saddle again. It is my season to fall in love all over again with my horse, his smell, the way his ears look when I'm riding, the clip clop sound of his shoes on the road.

The reason I bought Boone is his stoic attitude on the road. Nothing spooks him. He is not flashy, and is a bit lazy, but so am I. I wanted a horse I could putz around on and feel safe when I cross a road with log trucks. When I first road Boone, he walked up to a large tractor and put his head right in the bucket. "Any food in here?"...Just then three deer jumped out of a wooded area, "Deer," he said as we casually walked on. We worked in the corral about 20 minutes yesterday before heading out, and I promised Boone I'd get in shape too since he had too. "Best that you leave the Teddy Grahams to Guinnias then" he smirked, then winked. "You're feeling a tad heavy in the saddle, old girl."

We rode a couple miles and greeted the stray rooster that seems to be living in the bramble up the road a mile. I had tried to rescue him last week, but he refused my invitation. As we approached the bramble, I knew that rooster would jump out, and he did. "Oh, it's the rooster," Boone said in his best Eeorye impression. We rode up above our acreage and could see our rooftops and white flecks of sheep. Boone took interest in it all. We rode by Percherons and Arabians and ended up back at our place, where I worked him in some marshy areas- as he has a slight issue with sinking in muck [he had a bad experience years ago in mud]. The ride was over, and he dutifully stood until I said, 'Eat', at which point he was free to graze a bit. "Thank you, Booney," I said. "You're welcome," he mumbled, his mouth full of clover.

There are way too many things in life I'm unclear about. But there are a smattering of things I know to be true, and consistent. One is that when I'm on Boone, there are invisible currents caressing me. I have analyzed this sensation, and am pretty sure that this horse is a conduit for loving hands of all those that have ridden before me.
Posted by Katherine Dunn/Apifera Farm at 11:38 AM

Email ThisBlogThis!Share to TwitterShare to FacebookShare to Pinterest
Labels: Art, Boone, Life on the farm

sorry it's been so long - I loved this post made my eyes spring wet - it really resonates!! congratulations on getting into the book -- wow I always remember flipping through those in art school dreaming - someday - I'm sooo happy for you it's a great career accomplishment!! I love the donkey diaries too!! xo clare