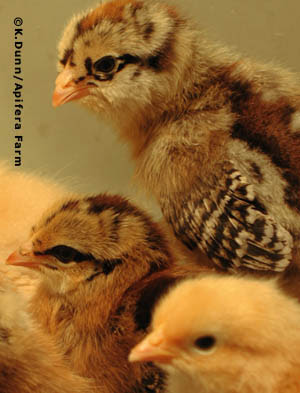 In which we first meet the new spring arrivals to Apifera Farm. For those of you not into chickeness, baby chicks are hatched and then shipped to feed stores where buyers pick them up. Imagine that journey...

"I liked the dome, why did I leave my dome?" she asked.

"It's how it works," said another.

They sat huddled together, warm, with blaring light streaming down from above. "The dome had subdued light, it was better," the one that first started up this conversation said. "I had it all there, I yearned for nothing. Now I yearn for my dome."

"I hear ya'." said another one. The memory of her dome came back to her. It's subdued light, it's warmth, and the lush feeling of the ocean swirling all around her, feeding her, nourishing her. The light from above, seeping in from outside the dome soothed her, as did the soothing sounds of clucks.

She never really contemplated leaving the dome. But one day she felt palpitations all around. She remembers thinking, "This is different. I am no longer what I thought I was." And then a 'crackling", a startling sensation of cooler air on her wet body and garish light blinding her.

"Startling, it was all so startling. And then you're out of the sky and in a tub with many other ex domers. It was so... chaotic!" one complained.

"Chaotic! Yes, that's the perfect word for it." another agreed.

"Chaotic indeed!" said another. And then the entire little flock let out their emotions in a chorus of chirps.

"This place seems bigger, more room. It's sort of like a dome without a roof." one said, trying to look at the bright side.

Just then the door opened, a woman walked in. She clucked. And sprinkled more food out in the plate that was setting in the bathtub full of baby chicks.

"Could that be the same cluck we heard in our domes?" asked one of them.

"Well, I'm confused about that too. We're chickens, I'm pretty sure of it. That's not a chicken."

The woman reached in and grabbed a chick, rubbed it on her face, then chirped, then cheeped. She put the little chick back in the tub with it's mates.

"She seems kind of like a chicken." said the chick that just returned from high above.

"Sort of...but there were lots of smells on her. But she was really warm. And smooth."

"Oh, that sounds like a chicken!" said another. And they all rested better that night.
Posted by Katherine Dunn/Apifera Farm at 10:03 AM

I really enjoyed this! Oh, how some days we all long for the comfort of the "dome."

What a sweet story. I guess we don't really think of what takes place in those little chicks lives. I hate to see any animals suffer and I worry that some may end up in some little kids Easter basket as a "toy". Every time I go to the farm store here in town I love looking at all the little chicks.

You are such a good chicken mom.

Aww very cute. Yes, I am sure they have yet to discover all the good things about their new chicken mom.

Ha! What a cute post! I used to have chicks (and, of course, then chickens) when I lived in rural Idaho-- sometimes I miss having them around... and ultra-fresh eggs!! Good luck with your new babies. :)

I so admire your ability to empathize with all living souls. What lucky chicks to be at Apifera with you!

All I could think of when I read this post was our Dome in Minneapolis.

Yesterday was the season opener for the MN Twins at the Dome. It's our last season in the Dome. Nobody admits liking the Dome, even though we had some fantastic memories there. Everyone is saying how great the new stadium in the great outdoors will be!

Maybe we are all spring chickens here in MN?

Thank you for sharing your life's work and wisdom with the world!

I am loving your blog as usual. Great posts and art work too.

What profound wisdom such young chicks have :)

Loved this post! I completely agree with the sentiments of the chicks, because I have heard mine having the same discussions. Now I have some eggs under a broody. Their conversation should be slightly different, post-dome.