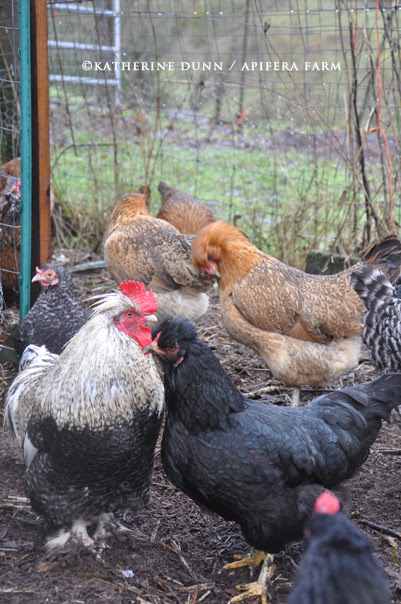 We have been on high alert after two chicken deaths last week. One was clearly a hawk, as I arrived up the drive and caught him in the act. It was my dear Golda-who skipped and hopped like no chicken I've ever had. I will miss her.

The second death happened that night, and although I first figured it was a hawk, the kill area seemed to be a raccoon, maybe several, as the feathers were spread in such a messy way. I suppose it could have been a bobcat, as we've had them, but it doesn't seem to be something a bobcat would have done.

So, much to their dismay, and mine, all fowl are contained in the hut runs and not allowed out to free range. I miss having the busy bodies running, pecking, scraping and working in the barnyard. But I would feel dreadful if I lost Priscilla or little Henny Penny who is elderly now.

I made bamboo floating ceilings to help keep a hawk from landing in the runs. I think they are a mix of "raggedy" and abstract. However at certain angles the duck hut looks a bit like lock down at a duck detention center.

I don't know a lot about hawks, or their territories. I guess all I can do is leave the fowl in for a few weeks and hope he passes through. The farm down the road lost about 20 hens this year- but to raccoons because his hut and fencing are mediocre and they were night kills. He agreed our night kill was not consistent with hawk or owl behavior, or coyote. We've never had a coyote in the barnyard. And when we get that new guard pup...oh there I went, I spilled the beans. You will hear more in mid February about that addition.

So I will try my best within my power to protect my flocks. I can't cover the skies. And I can't blame a hawk for being the hunter he is. 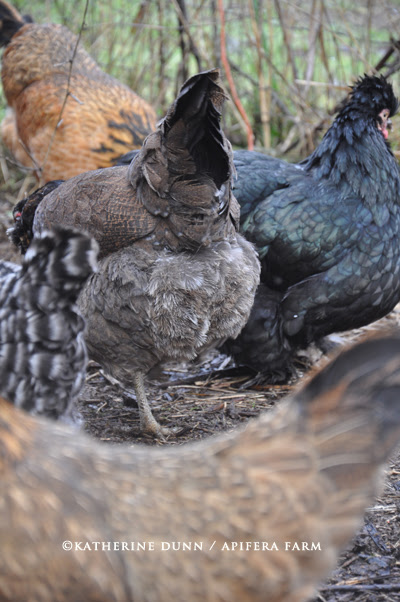 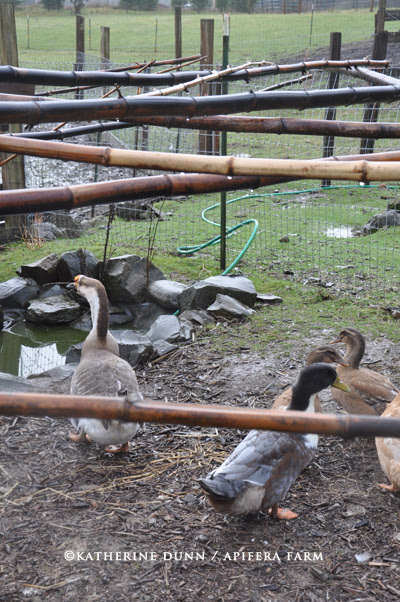 I woke the other morning to the screened porch turned pretty much upside down. But.... the door was still locked. Then I noticed all this rubble at the base of the door.... a raccoon had dug up the cement to get in. I couldn't believe it could do that, but had to be a raccoon as we have problems with them all the time, and they're just so brazen and determined. I think it was following the smell of cat food I'd been taking out to feed my little feral cat, Firefly. It didn't seem interested in all the wild bird food stored on the porch. I didn't know they would go after chickens. Geez.....! Wishing safe nights for your sweet chickens...
dulcy

Oh yes, they love chicken. I waited a few years before we go them here because I heard so many horror stories from other farmers. We're lucky to have a cement hut that was attached to the old milk parlor. I try to feed the porch ferels and then remember to pick up the feed, but forget sometimes. Have never had an issue....but, it's there lurking!

My daughter witnessed a hawk carrying off a young cat a few weeks ago. We were shocked, had no idea they went after cats. Not a kitten, just a cat on the young, small side. Hope your chickens stay safe.

Upsetting to see! I think they do a quick kill, that's the only comfort if you see it- although it would be upsetting to see if it wasn't- either way, nature is not the sweet mate we humans conjur, but has no motive either.