Caring for the undercats of the world 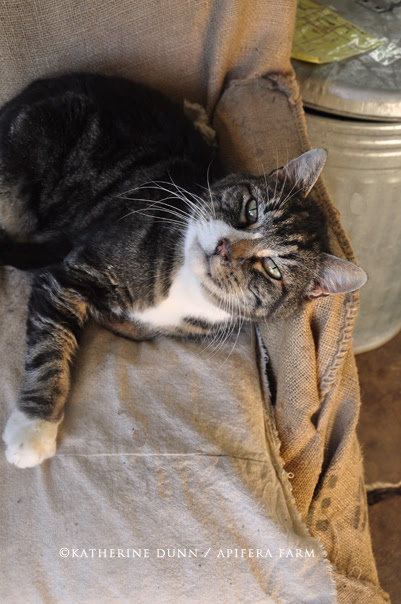 I was thinking the other night–as I was hand feeding Mother Matilda her Equine Senior feed–that feeding or caring for a sick or wounded animal bonds human and creature on a different level. Even if it is a creature you've known for some time, caring for it when it is wounded or ill seems to alter the relationship.

As I fed Matilda–yes, I did say 'hand feed'–which means I hold the feed in a dish and hold it up for her so others don't get it. This is to prevent her little rascal compadré to keep from getting a bubble butt–you know who I mean...Paco. So not only can I make sure she gets all her feed, I can observe her and just stand with her silently.

Animals do a lot of things in silence, and standing. For me it has become one of the most important things I can do to win their trust and just become part of the rung–stand with them in silence. I hope to do a book on that someday. No words, just photography.

But my other little sick man is still recovering from what appears to be a chronic infection of some kind. This is the third bout of it, and the meds didn't quite clean it all up, but he is improving and the gurgle sound is all but gone. He is drinking water well, a good sign, and his personality is just like the Samuelle I know-friendly, wanting companionship, non alpha. And yes, he is sitting on a chair in this photo which might lead you to the conclusion he is still in the house.

Um, yes, he is still in the house.

And he is fitting in just fine. I just felt after the chicken kills and the chilly nights, it was best to keep him in. I had intended-really, I did-to put him back out with Hazel and Gus in the goat barn where he resides, but really felt he wasn't progressing fast enough. I felt badly for Hazel, she and Sam sleep together. They aren't litter mates as Sam showed up as an adult years ago. But lately, Hazel greets me at the gate just as usual, and seems to be fine with Gus. The indoor clan seems fine with Samuelle. Well, all but Miss Peach who is part royalty. But she sleeps outdoors. Only Itty and Big Tony sleep inside.

We always suspected Big Tony was Samuelle's father, as they both came from the clan down the road, and the two of them are completely compatible. One funny thing is Sam tries desperately to 'join in' at dinner time. He gets to a food dish while Peach is eating-because in the barn that is how it works-you eat all smooshed together smorgasbord style. Well, not in the Big House. He is perplexed by this, that he gets batted at by any cat he tries to dine with. Poor fellow. He will learn.

Martyn has taken a shine to him. He calls him Little Tony, and Junior. He is the easiest cat to be around. I'm still force feeding him. We think he is eating in the night while we sleep, but I want to make sure he doesn't lose more weight.

We love and appreciate any of you who choose to give small donation-at various gift levels- to help me maintain the Misfits in the barnyard, including the strays. Thank you.

Such a sweet face! A lovely boy, that Sam. I'm so happy he's doing better.