Dropped down by a tornado 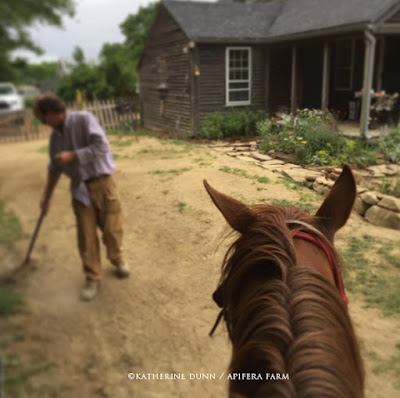 That's what if feels like. You know, like when Dorothy is inside the twister with Toto and finally the house is dropped down on the ground?

We drove two hours to see a close friend this weekend who after many years in Oregon moved back to Maine where she had lived for years. Both of us experienced similar paths in some ways once we decided to move-in that doors just began to open, details fit together kike puzzle pieces, there was a whirlwind energy that was driving us forward, time sped up in some ways, like a beautiful storm that didn't kill anything but uprooted the scenery in a permanent way.

We delivered two of the piglets to her house where they will live as grass caretakers and pets. My friend is in the same state of mind as I am-feeling for her land feet, still somewhat discombobulated from the move, but happy to be here.

I left our get together with a good feeling. I became very aware that I am in the lull after the storm. I have moved an entire farm across the country, left a home and piece of land I nurtured and loved and landed with all extremities attached. My husband has no income right now and won't for many months and I am the one who brings in what income I can and still watches the savings account dwindle as we forge on with necessities-like the barn. After the sense of awe and wonder of arriving, I am calming. I realized that I have earned the right to...just be me now, just watch and listen for awhile. The sense of

Oh my god I have to get this built and that done and make this happen, now, quick let's get on it so then I can really settle down...

is softening into more of a

I like this place, look how nice Martyn is making the fledging garden, oh things are really forming, think I'll have a cup of coffee, maybe I'll sell a painting soon.

Many people, some I don't know that well, have told me they are watching our relocation with interest, as they too have ideas of making a big move, or they want to move but haven't figured out where or how. There is a balance for me to project here-I will not sugar coat it-there have been many dramatic elements to this move-leaving animals behind [something I underestimated on my heart I have to admit], leaving a place of my blood and guts behind-and there has been grief, for I am grieving the loss of my old farm, and some people I won't have around. I suppose it's like breaking up with a job you like-you didn't hate it but you felt you had reached a wall and needed to move on. I say this though- don't let the fear of discombobulation scare you from moving. It is a temporary state. If I hadn't left Minneapolis, or Portland-imagine what I would have missed.

But now that the house has dropped on the ground, and I am doing things that are part of my skin, things that grounded me in my last home-riding, picking up hay, delivering piglets, building a chicken coop, watching the flowers grow, getting to know the mail person-each of these activities puts a softer veil on the grief of leaving behind things I loved.

People say that there is a reason we were brought here. I believe this. It will make itself known over years ahead. I am as interested as anybody to know-but like any good novel it will unfold chapter by chapter. 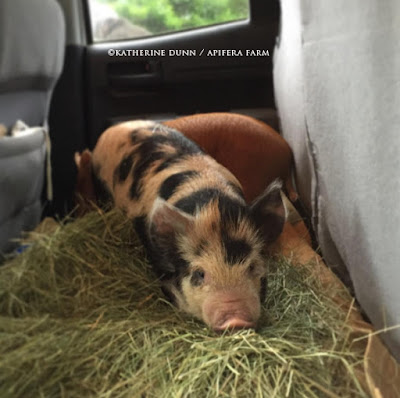 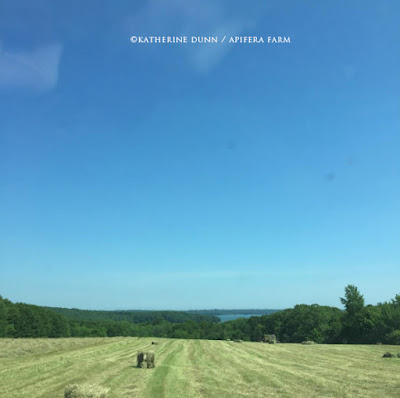 Posted by Katherine Dunn/Apifera Farm at 7:12 AM

Oh what a cute spotted pig. I like that word you use, discombobulated. Somehow it makes me smile. Your life in your new home is unfolding like a book, page by page, with joy now and ahead.