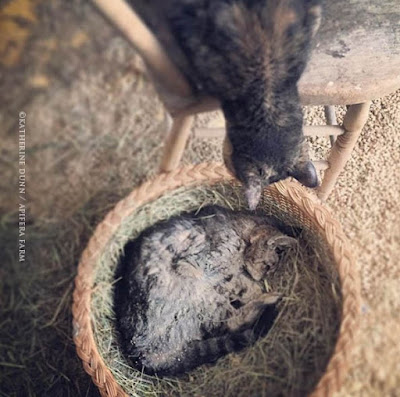 Sometime last night, the sweet and tiny Maxine flew off.

I was prepared and knew yesterday she was checking out. I had a long talk with her-I try to never tell an animal, "Don't go yet" (although I fail at this in certain situations, which is pure selfishness on my part, of not wanting to lose a friend-death is not about me, their time is not about me),and I knew Maxine's little body just could not go on. She was calm and comfortable when I said goodnight, in one of her favorite sleeping baskets. The winds in the giant mega storm last night were fierce with huge wind gusts until about midnight. I wondered if the sound of the wind inspired,

"I could catch a good ride on one of these," her little soul thought, still attached to her body.

This was not a case of let's intervene and drag her to a vet in a blizzard, this was my innate understanding she was ready to die, or her body was. It is not my teaching to intervene when Nature has given me clear indicators that it is an animal's time. Over the past 16 years of taking elders on, I have learned to step back and try to recognize if this in an animal in distress, or animal that is now in the spiral we all will face at the end of our body's life.

I can tell you that when I first saw Maxine at the shelter website, I felt a pull, but sensed then her days were very numbered and I opted to give it some time. When she was still there when I checked a month later, I called to say I would bring her home here. One of my goals is to always listen to my intuition when I observe animals-and if you look at my last 16 years of helping seniors I seem to gravitate-often-to the ones that are getting ready to die. I am not bragging, I just have learned to be open about this. Sometimes I also gravitate to the ones that need me, or I need them, for some reason. I don't believe any of them have come into my life without a reason.

I sensed this with Max. But when I put some weight on her I thought, Well maybe she has some living to do.

The most important thing to know, is Max was here at the end, not at the shelter (although our shelter does a wonderful job with the animals, and they respect what I'm doing too). Max had been brought in at her elderly age by her family-they said they could not afford her meds which were about $15 a month-PLEASE, No People Bashing is allowed here-I bring it up because while I do not believe animals judge, I do believe they sense a situation for what it is. Which means I know Maxine knew she was here at Apifera and wasn't leaving, except when she chose to. I can tell you she was held every day and was being groomed daily to get all her mats out which she clearly appreciated. I made sure all the other cats saw her and I sat with her this morning while some of the elders acknowledged her body.

Maxine is now wrapped in a warm fabric and has been placed in a special box where she will rest until Nature let's us bury her. I placed feathers with her for her journey. I am happy for her-I could tell life and her body was wearing her spirit down. She was so cooperative taking her daily pills, and she won't have to endure any of that any more. What a sweet, tiny little soul she was.
Posted by Katherine Dunn/Apifera Farm at 9:39 AM

oh, my.
deepest sorrows and sympathies.

beautiful how she caught a ride on one of the winds......

She sounds precious. I am always relieved when an animal is able to die at home rather than being taken to the vet. She was warm and loved.

Thank you for being you!! xoxoxo
You are a blessing to all those in our animal kingdom to whom you bestow your love and care.

Thanks everyone, here everywhere else people sent comments. She was loved in the end, she knew it.

I absolutely adored Maxine when she was at the shelter with us. Thank you so much for taking her in and giving her a nice place to live out her remaining days and a soft place to rest. No doubt, I cried reading this but I'm glad she's free from the weights of this world.