The Old Blind One Eyed Pug has a therapy gig 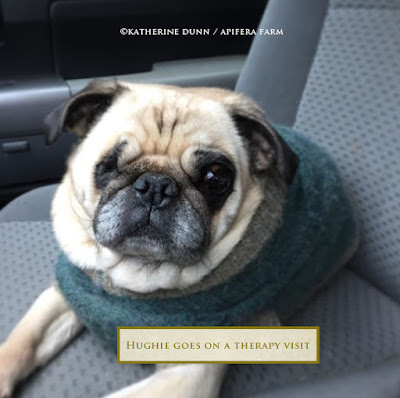 I decided to take Hughie down to the nearby village of Round Pond to visit with one of our elder homes, a private residence for six elders. I have taken Opie there several times, and Pino, but with the winter weather decided the old pug would be a perfect therapy guy-and he is. I knew he would be. He sat contently on my lap as I sat by various residents and chatted, while he napped, often with his head on someone's lap or arm. I was so proud of him. I did not take photos, but when we drove home, I took this one of the healing pug. right after, his little eyeball had a hard time staying open, he needed a nap.

I really felt like it a turning point visit for me. We talked openly and honestly about how people see elders as...old people...and forget, or fail to recognize these are people like you and me that had full and vibrant lives at one time, and still do if they are given the opportunity. I think part of it is it is uncomfortable for people that are not elderly yet to see what is coming, the fear of maybe having to give up independence is frightening to all of us, so instead of including elder residences into our lives, we hide from them-out of fear of what we might face.

Yesterday I sat on the couch next to Barbara who was born in Round Pond in 1932. She is always very quiet when I visit there, and has always been on that same spot on the couch. She often is awake, but closes her eyes and doses a bit, but she has her ears open and pops to life. Yesterday, the pug laid his head on her arm and napped while we all chatted. As we were all talking, I asked Barbara what she did in Round Pond all her life,

And of course we all said that was not true. The manager, a very nice woman I am getting to know, jumped in and told me that Barbara was a writer, which of course I was interested in. She likes to write stories, often in rhyme, about people she knew in the little village. They brought in a pamphlet of some of her writings and it was really wonderful to read them. It also allowed Barbara to open up more-it was the most I've ever heard her say.

Libby came to the residence because she ended up in a wheelchair after surgery at some point, and she knew she could no longer live alone in her home, and she loved her home. She is still trying to sell it three years later and it is a strain on her. I could hear the sadness in her voice when she talked about her house on an island, but she also said she was so lucky to live in this residence which is in an old village house.

We talked about how infuriating it is to be treated like a baby when you are elderly, as if you lose all your marbles or ability to think. I found out two of them are knitters and told them about my Old Kitty Knitty Club and they said they could help me learn new stitches.

The six residences, each of them in a small village including the one in Wiscasset that Opie and I go to, are not allowed to have animals so they told me how much the visits mean to them.

I left our get together feeling like Hughie had added something to their quiet day...it added something to mine too. We are all in this together, this thing called life, this process of aging. I do not want to fear the coming years, I want to be vibrant, and share that vibration with others. I hope I can live independently, like my mother who died at 87. But it might not be up to me. In the meantime, I will recognize, or try to seek out, the vibrancy in each elder as I get to know them more.

[If you like the work we are doing helping old animals, but also sharing them with elderly people, please consider a donation to our non profit]

Posted by Katherine Dunn/Apifera Farm at 9:36 AM