"You're a girl," said Moose 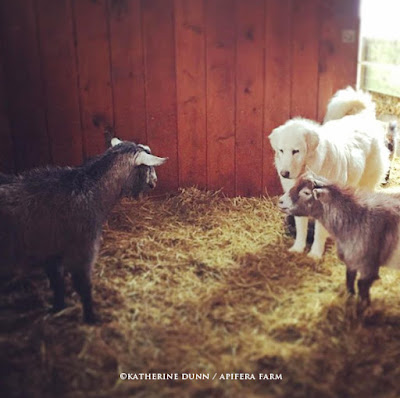 Sophie is our only female goat...at least until yesterday's new elder arrivals. Three new females now call themselves misfits, and it got the boys jazzed up. Of all of them, Moose was the most enthralled. Even though he was neutered early as a kid, Moose still seems to want everyone to know he is all male in his mind and heart. He runs around wagging his tongue a sign of foreplay to a goat, and so he was quite pleased that I finally brought home female Misfits.

I let the new arrivals sleep with Tripod last night and let Opie have a slumber party with the big boys last night. All went fine. But this morning I made further introductions, letting the as -of-yet-unanamed elders hang out with Moose, Goose, Wilbur, Earnest and Marcella. Marcella is very protective of her herd, so I introduced her to the arrivals first, which is how to work with a Maremma. I sat down with her, and petted the new goats letting Marcella sniff and see that I considered them allies, not threats.

I felt confidant all was well and left the stall and a few minutes later peeked over to check on everybody and caught this photo. Moose was clearly in deep conversation with the new elder arrival.

"Yes, I would think so, sort of, I'm a hermaphrodite to be concise," she said. "But don't think anything of it."

"You are beautiful like a cup of coco," Moose said.

"May I flap my tongue on you," Moose asked.

Marcella watched the entire conversation making sure no harm was done.

Eventually the old girl turned away. She likes to stick her tongue out.

"You have a lovely tongue," said Moose.

It might be the beginning of a beautiful friendship....or not. We will see, it's up to them of course. 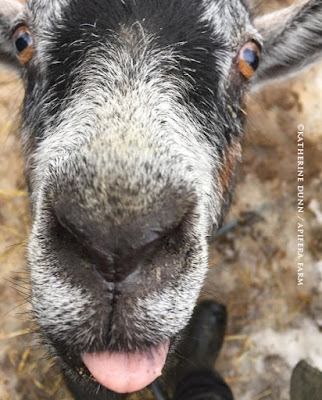 Posted by Katherine Dunn/Apifera Farm at 11:27 AM