They had lives, and still do 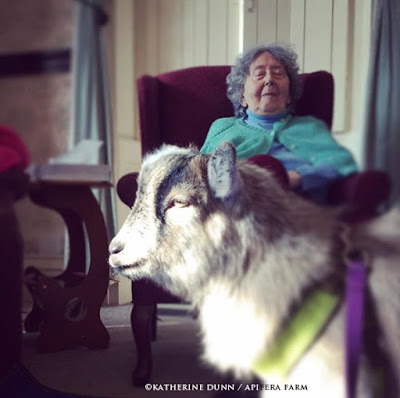 Opie and I visited our elder friends yesterday in Wiscasset and we were happy to have Martyn join is. It was a very nice get together, and I found out a lot this time around about our friend's former lives when they were younger.

I am not sure if 'former life" is the way I should describe their younger years. It implies it is gone. But those past lives are carried along with them as they age and enter their final years. When I look back at my twenties when I lived in NYC and worked at an ad agency, it does feel like a different person-and of course in many ways, I was. But all those experiences formed who I am now. When I talk to the elders, I want to always strive to see the entire person that has formed over the years.

I've been going to this particular elder home for some time now, and felt comfortable yesterday steering the conversation a bit. We were talking about one of the Maine islands one of the residents grew up on, and that led to finding out where others came from. I knew some of their home towns, but what a surprise to hear about Ruth, a very quiet woman but one who has opened up a lot. She was from NYC, and she was a graphic artist and worked for many magazines. We pondered how we might have passed each other on the street in the '80's when I lived there as we both worked in midtown. And she lived ten blocks from me on the Upper West Side. I also found out that Jeanne was a dancer and travelled with an entourage around the east. She danced full-time until she married. I asked if she ever danced in NYC and she had, and she told me she liked visiting there because her sister, also a dancer, lived there.

"She was quite well known," Jeanne told me, and her name was Claire Luce which sounded so familiar. I told her I'd look her up. "She danced with people like Fred Astaire," Jeanne said. Jeanne always comes to Opie's visits with red lipstick on, and lots of red scarves or sweaters. She has a sense of style and reminds me of how my mother always looked her best as she aged. It made sense knowing more about her background.

When I got home I looked Claire Luce up, and was amazed to see what a famous person she was, dancing with Fred Astaire and Ziegfeld to name a sample. She was often in the papers and had quite the career. She died in 1989 at the age of 85 and was survived by Jeanne.

It all made me think about what role I am playing on these therapy visits-what is my role, what should my role be, or not be. I know that I've talked to them, and other elders we visit, about the annoying way many people ignore elders, or treat them like invalids, or babies, or people that simply have no new ideas or nothing to ad to life or conversation. I feel one of my roles is to listen, and encourage them to share, and I really want to hear their stories. I think that is why it is all working, this therapy visit gig, because I really do want to hear their stories. I'm not doing it for brownie points, I just like old people and their bag of life they have waiting to be opened.

I think another one of my roles is quite simple-to just be me.

I don't pity them either, instead I empathize with them. There is great wisdom in aging, but also great cruelness at times-the loss of physical abilities when the mind is still sharp, the loss of friends and mates, the inability to care for oneself, the fragilness of bones, or the whispering of the family on what to do with grandpa. The naysayers, 'You're too old to have another dog..." that elders are confronted with. I think more than anything, elder people of all abilities want to be treated like adults, like fellow humans. Just as a teenager wants his parents to see he is capable of doing things, so do elders. I absolutely cringe when people talk to elders like they are babies, or not in the room.

I noticed that Richard was not in our get together. I never ask where someone is-but I was thinking it. Sometimes someone just doesn't come to an Opie day because they are at an appointment, or they are visiting someone. But Joe told me about Richard-he had been sent somewhere to receive care that the residence could not give him. And they didn't know if he'd be back, or he might have to go live at one of the other five homes. We talked about what a nice man he is, how it takes him a bit to open up, but how he started coming to Opie days regularly and smiled a lot. Nobody knows where he is-that is how it works, it is a confidentiality thing in these elder homes, it is the norm. At some point, if he ends up elsewhere, they will be able to write him, or he might come back. I hope whatever happens, I can visit him with Opie.

It is part of this. They leave, one way or another. Just like the old animals we take on, just like our beloved family members, just like the leaves and old trees. All things must pass, all things do pass. Once you really understand that, it makes life much richer, it makes more sense-the death part. It is part of it...the big it.

So it was an Opie visit with many lovely moments-like when Opie figured out there was this beautiful sunbeam streaming in through the floor to ceiling window of the old home, and he just stood in that sunbeam, barely able to keep his eyes open. In the background, Ruth was dozing off too. I just love that photo. 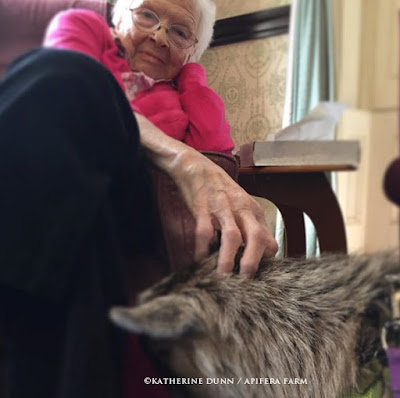 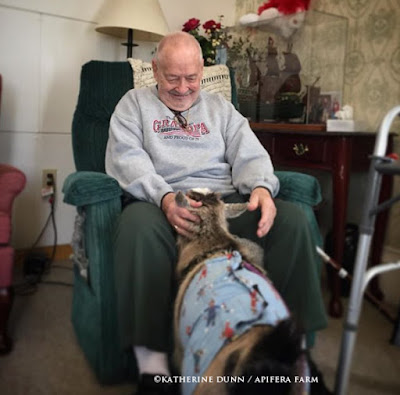 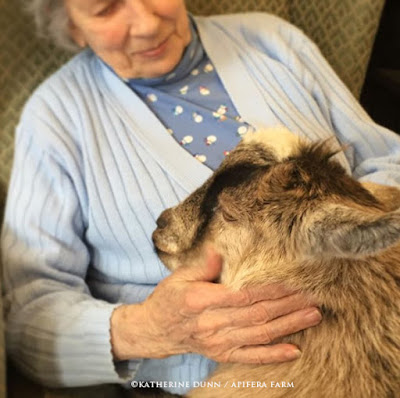 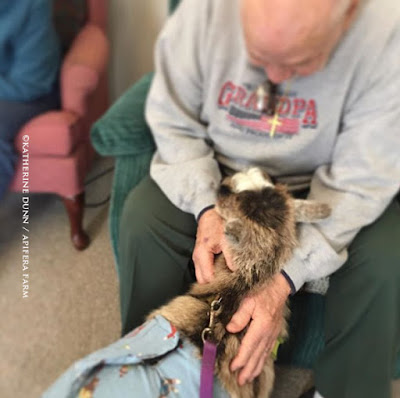 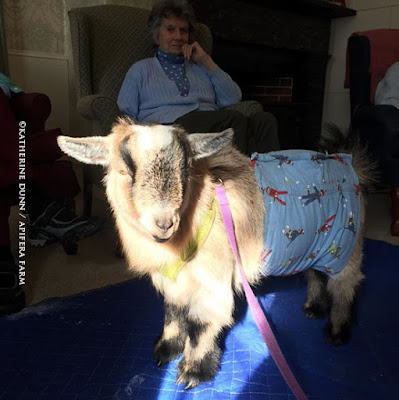 Posted by Katherine Dunn/Apifera Farm at 10:16 AM

How fun! I imagine the faces of the families when these residents tell them that they were visited by a goat. :)