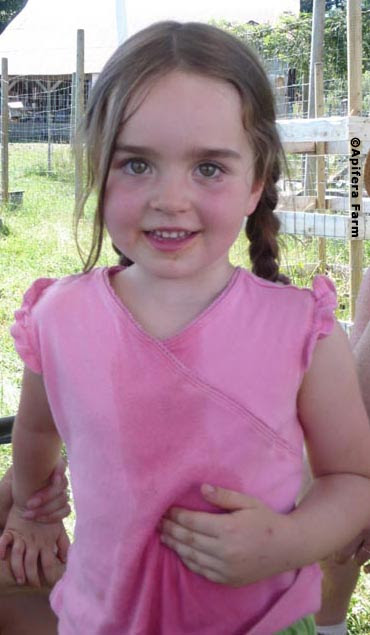 The Pie Day was so incredibly hot, we found out later it was 99 degrees! There was a moment at around 2pm where I really thought my head might just explode. Amazingly, people kept coming. I figured at 11 am we'd get a bunch of brave folks, as it was already close to 90 degrees, and then by 1pm or so it would be dead. But people kept coming. Martyn mused at what an overwhelming size crowd we might have had if it had been 75 degrees! 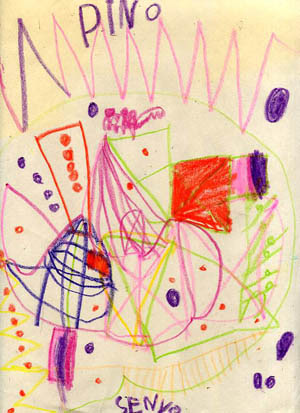 One of our guests was Senya, who was turning five. She brought five of her friends, including a pie ambassador, Kiran, to the pie day. The girls groomed the donkeys, visited the pet cemetery, drew pictures for Pino, and picnicked in a shady spot. Senya here is demonstrating her technique for keeping cool, the old ice-cube-under-the-shirt trick.

The girls were a complete pleasure to have. What a great way to turn five, which I explained to Senya, is a very good year. Senya drew this picture for Pino which is of a fairy ship - but you knew that. I know Pino did.
Posted by Katherine Dunn/Apifera Farm at 4:13 PM

Email ThisBlogThis!Share to TwitterShare to FacebookShare to Pinterest
Labels: Pino Pie Day: past

Happy Birthday Senya,
You're a very clever girl - I'm going to do that ice-cube-trick if it gets too hot this summer!
You're a great artist too - I love the colours you used for your fairy ship. I'm sure you made Pino very happy.