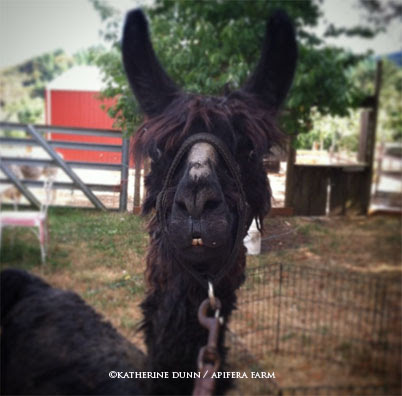 Aldo is gone but I can sense him everywhere a day after his death. Yesterday afternoon, I visited the spot where he died. It's a beautiful spot. It was one of his many final gifts, to die in a spot where we could see him. He likes the woods nearby and he could have easily lay there for days without us giving it too much thought.

I shall lie here and go to sleep, this is a good vantage point for me, and them, he could have thought.

When I arrived at the Aldo's Spot as it is now known, the young male llama was nearby. The flock was on the opposite side of the cross fence, so he was searching for a herd. Aldo had served a purpose for this youngster-he gave him stability and grounding in his new home on his first days. He showed the young male the ropes and was clearly the leader of the two. That might have changed, but Aldo did his job and it helped me out. The elder statesman could be relied on by me to bring in the youngster at night, if I wanted gates shut.

I have always believed that elders can have a role, a significant place of respect not only in the human world, but in our animal world. It is the young that have the loudest role in commerce, commercialism and often the family. Nature also culls the elders. It is part of keeping the rest of the herd safe, and healthy. To each there is a time-it should not be feared, it should be the catalyst for enjoying and respecting the life that is given, no matter how long one has.

In Nature, the elders show us they are transitioning out of the herd or their rightful place. I can't speak for every species, I am not a animal expert and won't pretend to be-but I do know my flock and I see how the eldest are now spending more time separating. I count them every night, the flock, to make sure old Daisy has made it back.

Aldo's life was repurposed when he arrived here. I try to do that for the ones that I take on-watch them and see what seems to make them content. Sometimes I move them into a different field, with different pasture mates, and they fall back into themselves, into a role they understand. Aldo was this way. On his arrival, I had him in the orchard, to get to know him. When he saw the flock, he went to the gate. He clearly told me he wanted to be there, and he settled right in. When the flock moved, he wanted to go there too. His old age and fallen pasterns and thin condition, made it problematic sometimes to always be with the flock-since I was trying to put weight on him. So I created another flock for him-crippled goats or piglets. If there was more than one body to watch, no matter the species, he was in his element. His little elder goat sidekick - Scooby Keith- that he arrived with followed him at first. But eventually, Scooby made it clear he wanted to be with me, so he came to the upper barn, and then in time, he was able to acclimate more to the goats.

We are trying out the name Otis, Wild Otis to be exact, for the young black male. He has gone from being Ollie Ollie Oxen Free to Wendell, and now Otis. I hopes this name sticks.

I went to the field to relocate Otis, figuring this could be a long process. But I was able to encourage him along and then into the lavender field.. From there he hugged the fence line where the rams were. So I went and got our resident love machine-Birdie-and haltered her, led her to the field where Otis was, and within time, he followed us back to the new barn, into a stall where I could grab and halter him.

Each time I have to halter him it is a lesson for him, and he did better this time than last. I led him over to the donkey paddock where the sheep now live at night. They then wander up to the high fields for the day, returning at night. This morning, I was so pleased to see him up by Old Oak, sitting amongst his flock. And this morning, he went right up with them to the fields.

In his passing, Aldo the Elder created space for Otis do to what he has come here to do-guard sheep. The elder statesman did not mind dying. And Otis now has purpose.

Though I never met Aldo, I will miss him. I'm sorry you lost such a good friend.

Loretta the cat came to live with me in her retirement. She had been an outdoor/indoor cat in her younger years but with me she refused to go outside but greatly enjoyed watching the world go by from her window seat. She was my first cat and I couldn't have asked for a sweeter companion. She too was ok to pass over when it was her time. She held on a bit longer than she had to for my sake. I am trying to do better about letting the animals know I will be ok when they go. You seem to do very well with that piece. Thank you for sharing your stories and photos and art.

He had a very strong, noble presence, Valerie, it is a fact. He was only with us a year and half , but sometimes the number of days doesn't match their impact...

EM- I do think some of them let go and just know we will be ok, some do what your can't did. On letting go, it's a skill. I'm not necessarily that good at it either. My writing is done in a time when I cn collect myself and thnk. But in the moment of Aldo's passing, I did get to gasp, hold my head, react, on my won, out of sight -I was thinking of this yesterday-when people say to me, 'how do you kep losing the elders and take it, I couldn't do that' and I was thinking [besides the fact that right now in my life this seems to be what I am compelled to do] I think it is like any muscle, the muscle of letting go.. And out here, I see dead things all the time, half gone, worms and other insects eating it-it's one skin, the earth, the body is just becoming closer to dirt, less close to sky, closer to dirt.

Oh sorry for your loss. Yes, elders teach us not to waste time and life don't they. I know he will be missed. xox