Raise a glass to hay twine! 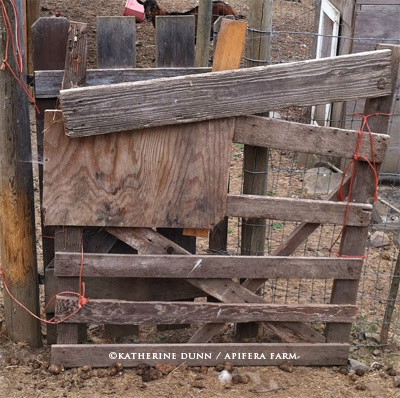 There was a time when I first started blogging–ten years ago, gads, a few worry lines earlier– when I wondered if people came to the farm and didn't feel the same about Apifera as they did seeing it on the blog. After all, there is a lot of mud, poop, broken down stuff, bent fence, and very in focus images when you are here in person, versus the lovely, slightly blurred ones I often post.

I got over that irrational fear early on, pretty much because I knew I was living genuinely both on this blog, and in my day to day life. At the workshop this month, I asked the guests if the farm was like they saw it on the blog, or not as 'magical' as they'd hope. They all felt it left them with even more donkey dust and glitter than they had imagined.

This 'gate' for lack of a better word is a symbol to me of creative farming-real farming- which of course involves not only living within your means, but getting things done quickly, without panic, usually on your own to prevent further trouble. It started as a nice little wooden gate which worked great as a lead in to The Lower Misfit Village way back when. But then came Earnest with his pig ability to crash through sweet ambiance props such as this one. With one twitch of his snout, up and out went the gate. His desire? To go sniff up some sows, as in Pearly June and Doris.

So up went a layer of wood-all in one piece, as in a wood pallet. And you don't need a hammer around here! There is hay twine, my best friend besides Martyn.

Well, things were looking up but then the ducks figured out how to squeeze under it and I didn't want that because they ate the goat feed at breakfast in The Village, and ended up in open fields where eagles can get them as happened one day. More gate reinforcements were added.

So far so good. But the only thing is we can't open the gate so it's really not a gate right now. Another new gate will be added...someday. I have to redesign that entire little area because the duck hut is settling and I want to make it into a permanent Misfit shelter-they all seem to love that darn shelter.

Let's all raise a toast to hay twine!
Posted by Katherine Dunn/Apifera Farm at 5:58 PM

My life right now is exactly that gate. What a wonderful metaphor for "not me, not today."