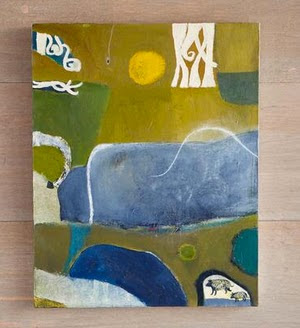 I am a bit off kilter. I know this is a phase. I went through this in Oregon when I moved to the former Apifera from the city. It was jolting. It took me months, even a couple years to find my real voice. I don't think this transition is the same, as I am used to country life, farm, isolation etc and I've been writing a long time and painting and have my inner gig. But, my creative voice is a bit out of sync. I went to sit at my drawing table and my chair is too low so I sit on a bunch of moving pads for now. I left my old ergonomic chair in the old studio. Why? I don't know. I think the final weeks at the old farm were so hard in my heart that I was trying to get out as fast as I could without breaking down, coupled with the limited space in the moving van and I was leaving things behind, I had to, but why that chair- who knows, I did my best. And now, after the excitement and thrill and love of the new farm I have time to reflect on what I left. I underestimated how much I would miss...well, the dead bodies buried there. Sounds odd, I suppose.

But I was wrapped in them, all the creatures I cared for or hospiced, help die, watch die, or found dead. Yes there are spirits and energy that live on but knowing their bodies were all there like a big misfit family, I guess, meant more to me than I knew. On the other hand, it was holding me down.

As I was unpacking stuff I found so many momentos of old friends-Stevie the Kissing Goat, Aldo the Elder, Lofa, so many more, Guinnias, Floyd...Giacomo to name a few. I realized I had pushed that out of me, those goodbyes. I thought I'd said good bye, but I haven't. I suppose maybe they will come to me here in different ways, or in art. You don't need to tell me there will be new animals, and story, and life and death. I know this.

But, I realized that all the wind we’ve been having, really strong wind and it comes off the ocean and it's been gong all night and day-it is very comforting to me–it is a message to stand in that wind, and just get blown up a bit, tossel the raggedy hair clumps even more, let go but acknowledge-it is grieiving I guess. This painting was about wind, with Doris and June, two pigs I left behind with the new owners. I also need to make art again, and...sell it. Perhaps garish to put it at the end of a poignant post, but selling a painting is an acknowledgement for me, and it helps one's creativity pop, and checkbook.

I wondered though, how would I paint the wind today. I might attempt it.
Posted by Katherine Dunn/Apifera Farm at 6:36 AM

Follow the kilter. You'll soon be back on carrying new treasures.

I can so relate to the bones of the ones you loved. My husband thought I was crazy because I wanted to dig them up and bring them with us and rebury them so they would be with me.. I still want to sneak back some night under a full moon and do it. I am close enough to do it. You wonder if there is enough room in your heart for it all. xox