The emergence of the old goat lady 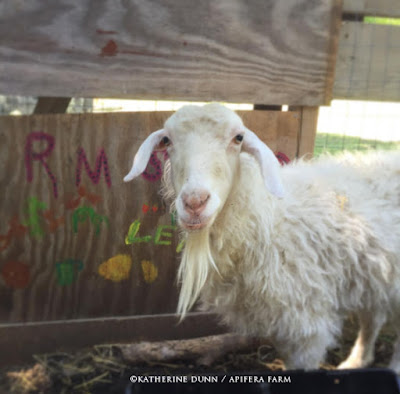 Sophie continues to let me know she is ready for relationship with me. When I first brought Sophie to the farm in Oregon, along with the very crippled and deformed Old Victor, she was shy and preferred to hide behind Victor, or stay out of the mix altogether. She let Victor do the bonding with people. And anyone that knew sweet Victor knew he was very good at sharing himself, especially with that amazing smile. We lost Victor last year to a natural death and he is buried in the former Apifera Pumpkin Patch of Old Souls back west. Before we left, Marcella dug up his grave and brought out some of his clean white bones, displaying them in a tiny row for me to admire. Years ago this probably would have upset me, but Marcella can not be held back, even from the fence that surrounded the cemetery-she smelled dead and went for it. There was some intrigue for me, I have to admit, to pick up his ribs and see if I could somehow put them back together.

But back to Sophie.

After Victor died, I knew Sophie would either blossom, or fade. I've seen it over and over after a mate is lost-in both animals and people. I had only had her I think less than a year, so I thought she might just fade. I had worked hard to get weight on both of them but after such long neglect it proved to be difficult. Sophie slowly became more personable with me, and started venturing out more on her own. She has never buddied up with any of the other goats, probably to protect herself from being knocked over. She has a genetic condition that makes her hind end crippled but still gets around fine. What I found was that it was on our journey East that Sophie seemed to really step outside of her shy self. Perhaps it was the tight quarters, but she just seemed...to expand a bit. I found that Sir Tripod Goat also expanded with Birdie the llama, and this was very pleasing since he was such a loner, only really interacting with me in the past months.

But every day, Sophie seems to look to me, not just for food, but for some scratching' and a time where she can be with me in a corner, leaning her body in to me. I've had other experiences where this change in temperament can be a good-bye, Wild Iris was an example of that. But I don't sense that with Sophie. I think she just knows, for sure now, that I am an ally.

I hope she continues on for some years, but she is going on nine, which isn't horribly old, but considering her years of living without proper food management, it probably took a toll on her body.

I shall let her lean into me until her time comes.

{If you like the work I continue to do with elder Misfits, consider a subscription or donation to help.}
Posted by Katherine Dunn/Apifera Farm at 7:56 AM