The flowering of The Head Troll 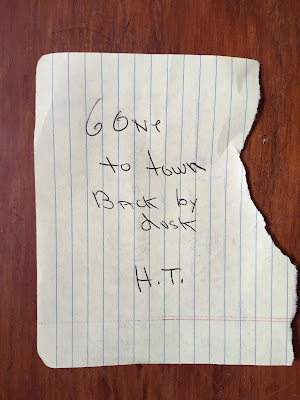 {Post Script: As some have asked, yes, she arrived home, before dusk as she said she would. However, she came back clutching onto a small handbag, with a shell handle.}

It is not my place to decide how any of The Misfits will evolve in there new environment. Just as I know my life will be stimulated in my new farm, creating new opportunities for expansion, why would it not be the same for the creatures that find themselves in Maine?

The Head Troll is aging, as am I. I sensed even back in Oregon her duties were beginning to feel heavy for her. She spent more time in Boone's pasture, especially after Marcella clearly became the guard of the main barnyard. I didn't feel sadness from her, more of a relief–like an old teacher who decided to go to a part time schedule.

So when I found this note tacked to the barn door this morning, in some ways I was not surprised. In fact, I felt happy for her. Nor does it surprise me she has ventured out to the village on her own, unafraid, to see what ever it is she has in mind-lunch perhaps? As someone who rarely, if ever, went out to lunch at our old farm, I can say Martyn and I enjoyed the luxury of eating out when we first got here two weeks ago. It felt like we were in Italy or Paris being waited on with no dishes to do. We can't afford to eat out much, but we hope to every so often here due to [hopefully] changed financial loads.

So The Head Troll is in town, somewhere. She is smart, I don't fear for her, people are sensible here and i suspect by day's end, there might even be a committee formed by resident village shopkeepers to put up a "WARNING SLOW DOWN TROLL CROSSSING" sign.


Posted by Katherine Dunn/Apifera Farm at 7:13 AM