And we have barn cats 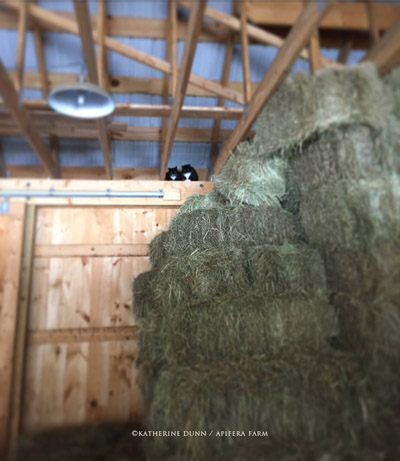 I have been waiting to write about this because the situation kept changing, but I can now say with unabashed truth that we now have two barn cats. I contacted a feral cat society nearby that traps/spays/neuters and vaccinates feral cats they trap, then they rehome them to barns. I have really missed having barn cats! As you know if you have followed Apifera for a long time, we took care of twenty five at one time at our old farm out West. When we arrived at our old farm there were two litters within a short time, and other young adults, and we trapped for over two years. All those cats, or most, lived well past twelve, and Big Tony, the sire of most of them, came to Maine with us. When we left, there were only two cats remaining in the barn. I knew I could not take them, they were at home there and would not have done well in a move. And they were twelve...but I think of them and wonder if they most likely have died.

The arrival of the new barn cats had a bit of drama. They arrived in small carry crates, but the feral society were good enough to leave the large crate with us, so we could acclimate them. We also immediately created a five by five area, completely contained, within the barn. We left them in the main crate for two days, and then we put them in the enclosure, with the intention of leaving them in there for at least a couple of weeks. I checked Martyn's work on the enclosure and there were a couple spots I feared they could escape, and we fixed those. There was also a spot in the back where Martyn had pressed chicken wire into a small area, and I did not thoroughly check it-I assumed it had been nailed in, but it was pressed in. One day later, I arrived at the barn and they were gone, they had escaped out of that area.

We were miserable, to say the least. I felt very responsible as did Martyn. The weather was cold and snowy and I really feared we had lost them into The Wood, for good. For three or four days I put out canned food for them, in the area they had first resided in, in the crate, away from the goats. I sprinkled flour all around the crate to show any foot prints.

Three days went by without a trace of them.

I had enough experience with ferals to know they can disappear for a long time, and show up out of the blue. I had no idea the background of these two, and we didn't know how savvy they were or what their survival skills had been, if any.

And then one day, foot prints! I was so excited. I knew if they were still there at this point, they would probably stay. They began eating the canned food and licking the bowls clean. I still had not seen them though.

Finally, after two weeks, I was cleaning the equine area, and looked up and there he was, the male. I nearly exploded with internal relief and happiness.

It would be another couple weeks before the shy female would appear, and they really look alike when they aren't side by side. But the male is much larger.

After another few days, the male was coming down a bit closer when I did morning chores...and then the female too. I have started climbing up a couple of bales, and sitting, not looking at them, just sitting. I really want to get their vet collars off, fearing they could get stuck on something-but since they are staying in the barn for now, I think in time I'll be able to get close and get them off. I do not want to trap them at this stage to do that, as it might spook them.

They have not spoken. However, I finally heard their names. 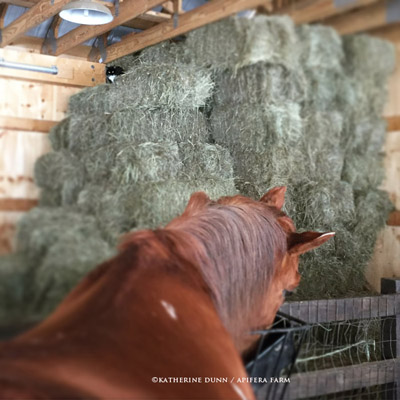 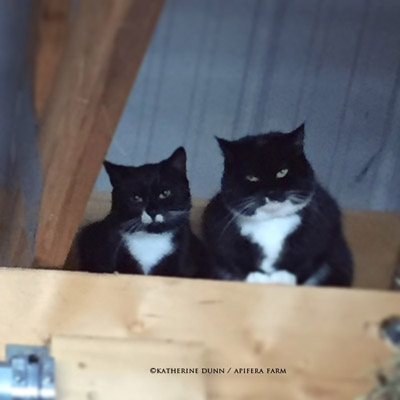 Posted by Katherine Dunn/Apifera Farm at 8:20 AM