"Opie, whatever you do, don't name that chicken!" 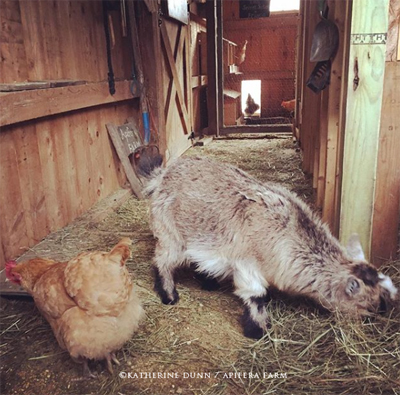 I was minding my own business...you know how these stories usually turn out...doing my nightly chores when I saw one of the Buff Orpington hens huddled in the corner of the coop. This was not normal behavior for her. I noticed she had a bloody comb. I assumed that Father, the rooster, was being overly loving with her. Father is a Barred Rock, and he came as a hatchling along with the other Barred Rock chicks. But the Buff Orpingtons were already established here and kind of just tolerate Father, and don't fall for all his sexual provocations. I have noticed that the Buffs flee Father, and the Barred Rocks have had there back feathers pulled out from overly demonstrative love making chicken style. Chicken sex is a tough business.

So anyway, Father entered the coop right after I had noticed the hen and she made a beeline for another corner to get away from him, and went down into a sitting duck posture. I decided to bring her out to live temporarily with the goats in the front barn, where she could have peace and quiet away from Father. She seemed very content when I did this, and she still could see the other flock through the chicken wire.

That was a couple days ago. And each morning I go in and there is that chicken with Opie. She has laid two eggs in the back of one of the sleeping cubbies. When I call Opie over breakfast, along comes that chicken.

"Thank you for getting me a chicken!" said Opie this morning.

"But I have always wanted my own pet chicken," Opie said.

"You have chickens you can see through the coop door," I told him. "Besides, how will you feed your chicken?" I asked.

"I will request that you spread out extra breakfast for me, so I can share with her," Opie said.

"Oh...yes, I promise. I will push the water dish out to you and the hose each morning," Opie said.

"Well, I don't know, Opie, she might need to go back in with the flock. I'll think about it today. Whatever you do, don't name the chicken!" I warned him.

I kind of forgot about it, to be honest, I had a busy day and lots of office details I was behind on. So when I went back out to do some barn clean up, there was that darn chicken, and right by her side was Opie. Opie looked up at me and then ran off to the hay room, the chicken followed. I looked down at the nest in the sleeping cubby and noticed she had laid another egg. That's when I saw a sign, crudely written in mud,tacked to the wall nearby the nest,

"Opie's Chicken Do Not Disturb"