My last conversation with the old pug...he spoke clearly 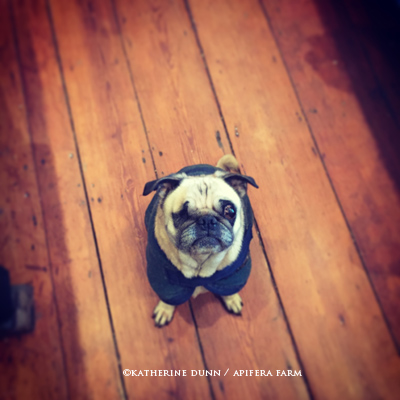 Hughie came into my life when he was going on nine. He was totally blind and one eyed. I knew his time with us would be shorter than getting a pup...but every day of his 4.5 years with us was a blessing.

I woke yesterday with a lot on the agenda, but I really didn't think it would be the last day of Hughie's life. I had to be in town early to take Martyn's truck in-he needed all new brakes which had rusted in the Maine ocean air since he doesn't drive it much in winter-so I spent three hours at the library proofing the upcoming White Dog book.

When I got home, I decided to try to get an X-ray for Hughie and was able to get an afternoon appointment. I've been back and forth for a week to the vet because of Hughie's health. Last Wednesday he showed early symptoms of spinal issues and pain-something common in pugs and something he has suffered from twice since we got him at age 9. He is now 13.5. I did not want to be without meds so got him into the vet right away. We put him on pain meds and anti inflammatories immediately and also gave him a shot for immediate relief. I saw some improvement and was hopeful...briefly.

The last time he had this, he bounced back in a couple days. This time his symptoms kept evolving, and it became clear it was more neurological. And he had this strange thing going on in his throat. So on Monday I went in to get more drugs, without Hughie, and ran into my vet and we chatted. We decided to keep him on the meds longer, and do an X-ray when I could get him in to see if we could figure out what this lung/thing was. And that's why I went in yesterday afternoon, to get the X-ray.

But when I carried Hughie to the car, I told him no matter what happened at the vet, it was going to be okay.

I was willing to see an xray, but my heart and instinct told me...he might not come home with me.

When I got to the vet, and he walked in to do the X-ray, I kind of broke down. I told him I wasn't sure if keeping him alive now was the right thing, even for another week of meds. He got down on the floor with Hughie in front of me and assessed him again, he was clearly in pain and showing neurological signs. An MRI would mean a 4 hour trip and having him put to sleep, and there was no point in an MRI if I wasn't willing to do surgery, and I was not. I was very clear on that in my heart. He is old, and the surgery is not a sure bet that what is causing the spinal issue can be fixed. He had hard enough time with dental surgery recovery. The vet agreed with this assessment.

As we talked...I just knew it was time. I had asked the skies to help me be clear when I went in, and they were. So...the vet went to get the medicines to put him down, and I held Hughie as he sat on the table.

And that is when we had our last conversation.

Hughie usually kissed me "goodnight", because I would carry him up on the couch each night to watch TV and at bedtime I'd hold his smoosh face and he'd kiss me, then I'd carry him to his crate. But I wouldn't say he was a smoochy kind of dog. So that is why this last conversation was poignant.

As I waited for the vet, I talked to Hughie and told him what a wonderful journey we had together here, and now he was the one that had to journey on without me, but I told him to look for Huck. He kissed me. Then I told him I was sorry, and he kissed me. I told him I could not see him be in pain anymore, and I felt I had to help him on this journey. And he just kissed and kissed me, slowly, very gently. It was not like him to do this much, but I truly believe he was thanking me, and telling me,

It is OKAY. I am okay. Please don't feel badly, thank you for doing this.

I suppose someone will tell me it was salt in my tears he liked. But Hughie never kissed me when I had salty lips from ketchup or even chicken.

I brought Hughie home to bury him, but was so tired emotionally I wrapped him in a blanket and lay him on the couch. That night, I told Martyn I wanted to watch television with him one last time. This is not like me, I am pretty resilient about death, and find the burial procedure helpful, and beautiful really-the full circle of a life in my hands as I cover it in beautiful Mother Earth. I think I knew his time was coming all week and had some conversations already with Martyn and the vet, and Hughie, but I had not quite accepted it was here, on that given day...I just wanted one more night to have my left hand on his little pug bowling ball head, rubbing his soft ears. His body was still pretty warm.

Martyn was up before dawn and dug me a hole in my hollyhock bed. I buried him without fanfare after morning chores-morning chores that were full of living and breathing charges. AS usual, I told everyone as I did chores that Hughie was gone. I spent time with Marcella. And when I was out with the equines, Pino stood five feet from me, away from the herd, just staring at me. I was too tired to sit with him. But I know he was acknowledging my sadness, that is Pino.

And so, once again, I am pugless for the second time. But Hughie is okay. 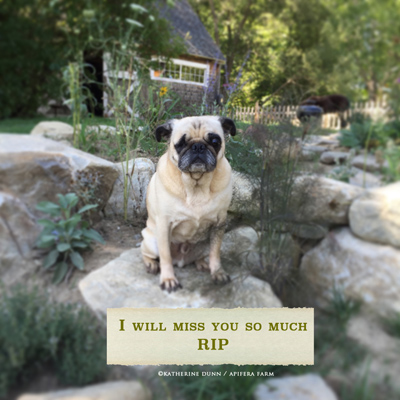 Posted by Katherine Dunn/Apifera Farm at 9:07 AM

Oh my friend ... such a beautiful, hard, truth-filled and loving recounting of the gift that is/was Hughie. I once read in a book by a zen teacher that saying good-by is life's only lesson... that at some point we will have to do so with everyone and everything that we love. And as you describe in your next post, what makes life rich and powerful and nourishing is the fact that struggle and grief and challenge are all woven into it along with love and joy and laughter. As a friend says, "if you want to feed the finches, you have to feed the grackles." I am grateful for you sharing your experiences as they help me navigate the goodbyes and the magic of each day. I only hope there will be some sort of blogger platform in heaven because I definitely want to read about your Reunion with all of the Misfits - that will be quite a hootenanny! Sending love to you all. xo

Katherine, O my heart.. I just had to do the same and my heart aches.. I pray that St Francis enfold all our beloved animals in his heart and accompany them to their heavenly reward. xoxoxo Rose

Oh my, my heart is crying so hard.
You have been a beautiful family to have him with you even for a short time.
He was a very lucky Dog.
Rest in Peace Hughie.