The intuitive work of a little goat 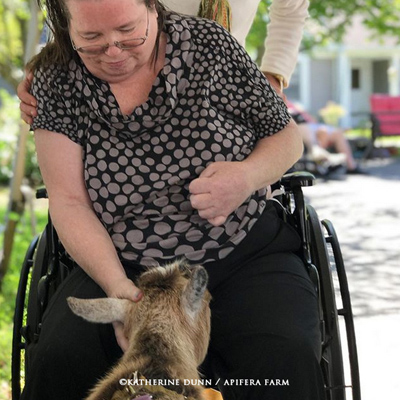 Opie has had a busy week, which I guess means I have had a busy week. On Thursday we visited Cove's Edge which is an elder residence, dementia home and rehab facility for short stay patients. They have a beautiful walled in, large courtyard perfect for animal therapy gatherings. I was really happy to meet their manager and she is beyond thrilled we can begin to come for visits.

I decided to just take Opie since I had no volunteer for the day. There were about 30 residents that came, and staff, and I guess some even left lunch early because they had all been hearing that Opie was going to visit!

We met some wonderful folks and Opie was his usual calm and collected self. And he sniffed out some people in real need of love. I have seen this happen repeatedly with Opie, as well as other natural healers-Pino, Birdie, White Dog to name some. The manager whispered in my ear to go over with Opie to a particular resident. I am not privy to medical issues/details with these folks, due to HIPPA laws, but I am guessing this woman who was in her 50's had had a stroke, I don't know. She was very gentle and had difficulty speaking or moving. Opie put his head in between her knees and stood quietly with her, and then I also lifted him up so she could pet him more easily.

And then I took him around to the other guests, and there were so many lovely encounters, like with Ernie, the retired farmer who Opie also took a shine too. There were some people who had goats in younger years. Usually I let Opie choose where to go [he is on a harness] and so when we were all the way at the opposite of the patio, about 30 feet from the initial woman we met, I said to the manager, 'Let's see where he wants to go,"

...and he deliberately walked back to the woman in need. He buried his head into her knees. This act of comfort was repeated several more times in our visit. The care manager was really moved by this, as was I even though I see it in action all the time.

I am not a scientist or theologian or whisperer. But I do know the power of innate empathy which all animals are capable of, some more than others. People are too, but in my opinion humans started using their brain more than their innate senses way back, and here we are with most people unaware of innate sensitivities some people and animals have.

The other interesting thing that happened was that when we went to leave-and we were there about an hour and a half which is a long visit for Opie-I tugged him to go. Usually after a good hour he lets me know he is worn out and ready to go, but this day, he locked his four feet and leaned into the person he was visiting. I encouraged him more forcefully to come with me, and he did, but then he stopped to see another person-all of them were in wheelchairs-and leaned into them.

For whatever reasons, I sense that Opie has deep connections there. There was a lot of energy flowing that is for sure. I was really proud of him, really proud of our day.

We will be making regular visits, and also other animals will join the mix.

If you like our work here, please consider a donation
Posted by Katherine Dunn/Apifera Farm at 1:14 PM