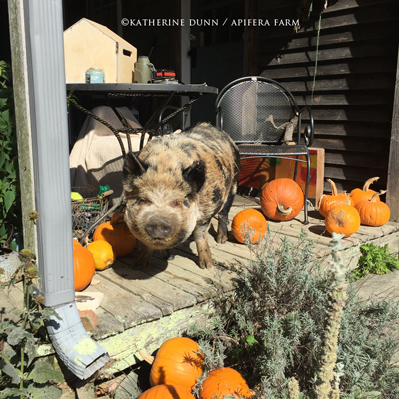 {Photo 2016} This is the first year since 2004 on the farm when I haven't grown pumpkins. I have to say I don't like it at all but it was an unusual year with the barn addition which meant our garden was a bit transplaced and I just decided to let it go for one year aand oly do tomatoes and lettuce. Earnest is bereft.

"I don't understand, pumpkins come every year" he said.

"There was no room this year, the garden got moved, but next year the pumpkins will be back," I said.

"I don't know how that will feel, not to have pumpkins," Earnest said, and he walked back to his hut to nap.

Which reminds me, I promised them all I'd decorate one of the apple trees so they could see it from the barn. I just hope they give up on the live nativity scene that we suffer through each year.
Posted by Katherine Dunn/Apifera Farm at 8:35 AM