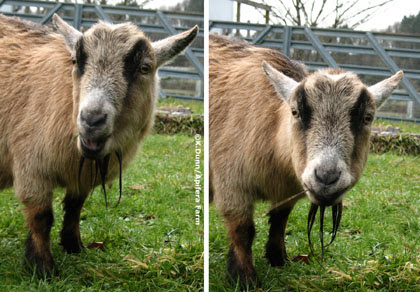 I have had a bad cold, and have had a cloudy head, pumped full of meds. So I was unsure if the story I present below really occurred. However I found these photos in my camera that were dated on the day the said story supposedly happened, so...I will present it here to you.

I had left the house in the late afternoon to get to the barn before dusk. I heard rustling near by, a leaf perhaps, or an old bag of feed blowing against a rock. A shadow came to the attention of the corner of my left eye. I looked, but there was nothing unusual. I kept walking, but had gone less than 10 feet, when a very old voice grumbled something..."too cold..." and some other words I can't recall now. I turned my head, there was nothing, just the cemetery of fallen friends and rodents nearby, and the old coastal sequoias. I had heard of ancient trees talking, so maybe it was the one of them...I continued to walk on, and could see Guinnias and Frankie at the barn door, some 100 feet away, waiting for dinner. But again I heard the voice, the same older voice from minutes ago..."Must go, will return." This time the voice was clearer to me, it sounded very familiar. As I turned again, positive someone would be standing beside me, there was Guinnias. Just as I turned to see him, I saw his mouth stop moving, and he pretended to be eating grass.

I do not know how he got to that spot, since just seconds ago, I had seen him at the barn, some 100 feet away. He moves slowly, and there is a gate between us. My common sense said it had not happened.

Guinnias walked over to me, and we began to walk to the barn. I looked down at him, he looked up at me, probably watching to see if my hand went in my coat pocket for a treat. It did not. But he continued to look up at me. He seem unfazed by what had just happened.

One can through life assuming that unusual occurrences are figments of the imagination. Or one can just try to digest them, and accept that a person needs the comfort of a voice sometimes, and if it comes through an old goat, so be it.
Posted by Katherine Dunn/Apifera Farm at 12:28 PM

It is what it is!

Do you think I make up all my stories about my goats? Sometimes we hear things if we're in tune; not whole stories but fragments of thought or a word. I don't find this strange at all.

Tell the "G" man thanks for the lavender. It's lovely.

Dear Guinnias,
Thank you for talking to dear Katherine and letting her tell us your story. You are a dear and I wish I could give you a big hug. Yesterday I received a special parcel from you. I was carried away by the scent of lavender, by the memories of my grandfather, and by the thoughts of you in your forever home. A few blossoms had fallen off and I tucked them into a sachet that I have that needed recharging. Such a gift in the middle of winter is truly an uplifting experience. You are so lucky to have green grass - my goats can only see snow as far as their eye can see.
Many blessings to you dear Guinnias,
Claire

I think there were two animal's that spoke in the Bible. One a Donkey and the other a Raven.

Is your Children's book coming out soon? I am so looking forward to it.

I'll check back for your anwser.

God Bless You and Yours!!!

Apifera is a magical place, so I'm not surprised that its animals can talk! What a lovely old man Guinnias is.

What a special story. Thank you for the lovely lavendar you sent me. I love it.

Dear Guinnias,
I so love reading the Apifera Farm blog, and especially about your adventures, that today on my blog, I awarded you the Lemonade Stand Award. I hope you will always have cold lemonade (or whatever other drink you prefer) when you are a thirsty goat. Thanks for letting me see glimpses of your life through blogging!
Claire (and all the goats on Whispering Acres)

dear guinnias, thanks for keeping katherine in line, sometimes when she isn't feeling so well she forgets that animals can talk and that she should listen!
how are you adjusting to your new home? soon it will get warmer and lighter and you will have big fields of lavender to break into.
say hi to pino and the other pals there when you have a chance, and keep on grazing, old boy!
ps: thanks for the lovely bunch of lavender! we had sewn up all our summer lavender for holiday gifts so it came at just the right time.

Guinnias is like the velveteen goat; he's been loved so much by so many for so long, and adding now his NEW fans and family, that's he's becoming ever more real. He has such an irresistible mug, doesn't he? Kiss Kiss, Guinnias! I'm going to make a banner and buy some pom-poms so when I read your blog I can wave them and chant that!

I'd imagine him to have a heavy Scottish accent. Is it so?

I'm with Cathy, Apifera is a magical spot where thoughts turn into art, words and voices.

I have on occasion heard my cats speak to me. I would not have believed it if I hadn't experienced it myself.

What a cool story! I wouldn't doubt that animals can talk. It's us humans (the superior species - what a joke) that aren't in tune with the rest of the planet.

I hope you feel better soon and thanks for taking care of the animals.

Thank goodness I'm not the only one who hears things.....

Hi everyone - It seems Guinnias now has a deserved fan club. I was thinking how cool it is that this old guy ends up his life like this. I'm in no way bragging- and many others take animals in, but it's just so nice one old guy gets some extra attention in his achy old body...I'm really not so sure it WAS Guinnias, but rather, I am thinking, suspecting that Guinnias is one of those really highly charged creatures that channels other's voices as a conduit to those around him that need it...I will document any further occurances.

In the meantime, I'm glad all donators recieved their lavender and enjoyed it - makes you think spring summer!!!

I love thinking of Guinnias as the Velveteen Rabbit...and yes, Cathy and Salmon Poetry have experienced donkey magic here, so I guess they can somewhat vouch I'm not a complete nut job about magic occurring. I suppose all of us have magic at our toes, if we stop to get in touch with it. However, through experience of life, I have come in contact with people, and animals, that are gifted, and not simply more in tune with higher energies, but are just plain gifted at recieving messages, and passing them on when the time is right.

Flassie- oh, this blog will BLAST the announcement if, I mean, WHEN I get a book published. Hang in there, it's taking a while. But I won't give up, even if I'm old and gray myself when it happens.

What a magical goat you are Guinnias. Ever since I laid eyes on you, ever since I saw your first photo I thought to myself what a wise old soul and a special goat you are. He is a specail gift on Apifera farm. I've loved reading all about you Guinnias.

He is just too incredibly cute and has definitely found the perfect home!