Compassion from one elder to another 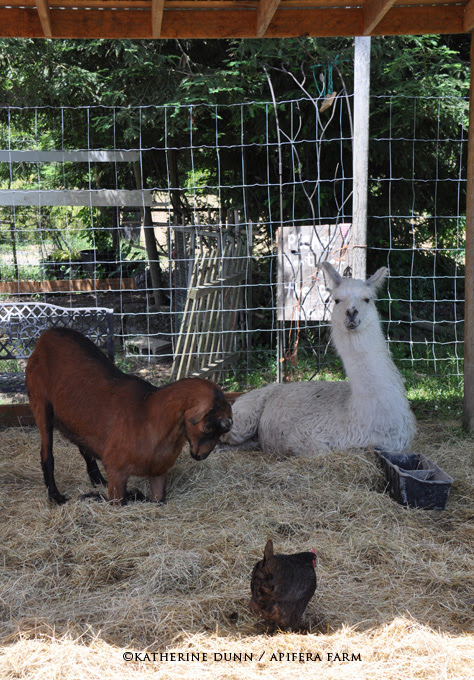 Do animals feel compassion for one another? I think they do, although I think it is compassion that is meant to help another survive, or be safe.

I can't help be touched and struck by Aldo's vigil over Stevie. I mentioned before that the old llama took to Stevie immediately-as if they were two old soldiers who recognized similar wounds-arthritic, aches, bent legs, fallen pasterns. But in the past few days, it seems Aldo has taken Stevie under his wing. He doesn't cry out to alert me that Stevie has cast himself, but he is always there when he does. When Martyn entered this morning to help Stevie right himself, he said Aldo gave him a wary chortle, but also accepts we are the caretakers helping Stevie.

Stevie is doing his best, as am I. I think decisions will have to be made in the near future. That is my responsibility to all my Misfits-to let go of what I want so I can make the right decisions for them. I have a covenant with each of them to help them when they need it most. This is perhaps my hardest case to really know "when". Stevie's case is unusual, as his attitude and expression are the same as always, but I know he is showing signs of physical discomfort due to so many years with crippled limbs. While the vet and I agreed last week he wasn't ready, I know that these situations can change quickly, especially if an animal's spirit just wears out. I am not a religious person, but I simply asked God and Aldo to be his caretakers at night, and I will be the same in the day.

Stevie will receive a lot of love on Sunday's Pie Day. Since I've put him in what is usually the Donkey Hug area, he will be the first Misfit people will see. I've gone to lengths to try and share Stevie's background-to show people his story. I know that Stevie has had a quality to his life and even though I was a bit conflicted when I first met him, wondering if the operation he received was the correct thing to do for him versus euthanize him, I came to feel confidant that it was correct for his particular spirit and personality and will.

It's not all puppies and sweetness out here. In between photos there is often turmoil, hard decisions, anger, sadness, misbehavior and pain. Then there is death, always death. It's marked the farm in every corner. But each death mark is also a reminder there was life too. They go together. I don't want to say good-bye to Stevie, but I know this will be his last Pie Day. I will make sure he gets and gives a lot of Stevie kisses-yes, he really does kiss. Pecks, gentle little pecks.

The thing about care taking an elder, or a handicapped creature, is that you do begin to let go, because you live it with them day to day. You come to an exhaustion point-you want the animal to feel good again, but you realize they won't. I do believe something goes out of a creature's eyes when they are exhausted too. There is just enough in their eyes, that if you look closely and quietly, you can see clearly the message they are trying to emit-release me.

I haven't seen that sign yet, but I'm watching. And of course, I hope I don't see it before Sunday, but I have already promised myself I will help him if needed, even if we can't have him here on Pie Day.

When Perla's legs were giving out at age 14, her world got smaller and smaller until it was just a cozy corner of the barn where day after day, we visited often and hand fed her anything that she would enjoy (mostly organic greens from the health food store, it was early April.) We carried her to the sun and the first spring grass and crawled on our hands and knees to seek out bits of wild garlic, chickweed, dandelion leaves. Many people would have put her down then and our neighbors thought us insane, but Perla was content to curl up bundled in her coat and doze until the next visit. It was very sweet time in which we got to know each other in a way we never had in those fourteen years and it made the passing easier. I think people often put down their animals than they need to, out of anxiety and panic, and miss the sweetness at the end. So I think the way you write about all this is pretty important. Thank you.

Lynda what a beautiful story about you and Perla- and the things you say about the end, even if it is days or longer-it is a special, sweet, emotive, raw, but very visceral time. Thank you for sharing this.

That is so very llama. Aldo will miss his friend very much.

I do truly believe they feel compassion and caring for each other. I see it in our doggie pack, defending and protecting those not as big, or strong. Hope Stevie enjoys his time and is not in too much pain. xox

I cannot begin to tell you how much I Love Apifera Farm. On May 21st we lost our beloved 'Kody Bear'. We are still having a difficult time especially my husband as they were daily companions. Our mourning continues... Kody was part of our family for 11 1/2 years. Thanks so much for sharing and putting these heartfelt feelings into words. They are beautiful.

Blessings to all,
Barb

I'm sorry about Kody Bear-it is very hard. I always think dogs especially hang around after they leave until they sense we are on our feet again, and that takes a different amount of time for each person.