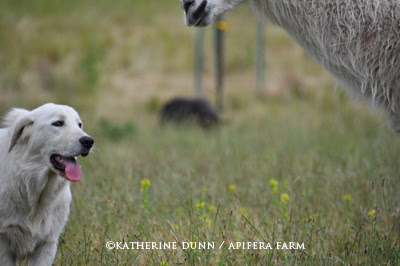 It's all evolving now. The Head Mistress spent her first day out in the fields. First, I let her escort me as we moved the 4 rams into the lower field. They were unfazed by her, pretty much, and she them. Then we took the main flock to the upper side fields, and this was Marcella's first time in that area.


{Scroll down to see all the photos}
She immediately got banged by a couple mature ewes, not because she was harassing them, but because she entered their area-she is after all a predator to them-at this stage. This is to be expected. But once we began moving, all was well. Keep in mind she is not a herding dog, she is a guard [she is a Marema]. What was so interesting for me, and exciting, was to see her body move-it was more coyote like, with a purpose. She walked the fence line as I stayed on the road. I walked to the front gate, made her wait while I checked for mail, and as we walked back to the house through the lavender field, her movements focused on the perimeter.

Now 6.5 months, there is less puppy play or behavior with the other animals. If there is, it is short lived. A relief for all the Misfits ,and me–as charming as a pup is, the charm fades.

I knew that once I let her into these fields she would be on to them all the time, and she would find a way to get into them. The breeder told me this - "If they want to get to another field, they will find a way.You can't contain them at a certain stage."

This is actually good, as Marcella will be in charge of many areas, not just the flock. So the next day, she had found a way back into the lower field. The only problem is she still likes to pick on Old Rudy a bit, in puppy play. I don't know why she chooses him, but once in certain fields, she can get to him. It doesn't last long and all seems more settled today. She doesn't hurt him anymore, but he just can't move fast.

Yesterday, I had her out with the working pigs, Doris and Pearly June, and of course Earnest. This is also where the llama and Scooby hang out. I had been warned about mixing the llama in with the dog, even if he is old and arthritic-but mainly it was a concern when she was little. I observed for more than an hour and there was no rough housing around the llama. More intrigue than anything. More on that later. She still is not in with Aldo for long lengths.

It's just fun to watch her mature. I felt really bonded to her yesterday as we walked in the field. She at times left me to go up to a higher vantage point so she could look back at the barnyard some 500 feet away. In time, she will want to find vantage pints to see her flock too. She will have a busy life, a real purpose here. I was busting with pride yesterday-she and I learning all this together. 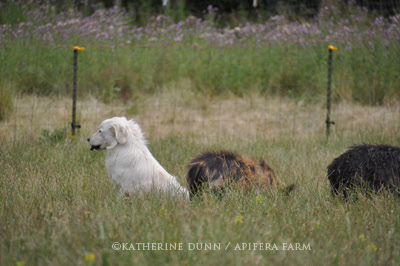 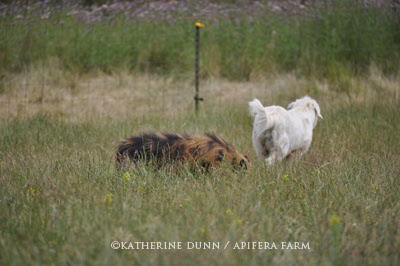 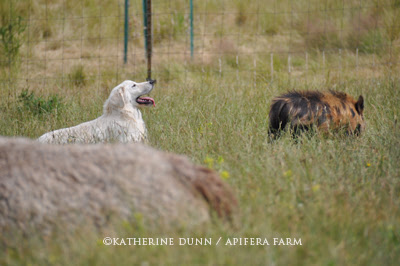 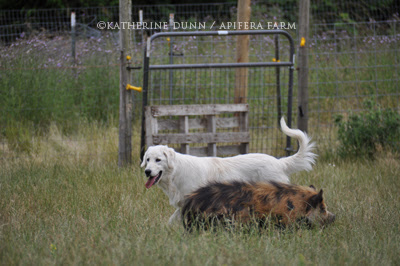 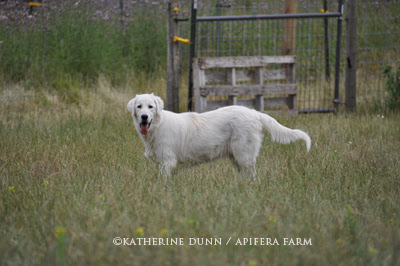 Posted by Katherine Dunn/Apifera Farm at 11:59 AM

She is getting so big so fast. She looks wonderful in the fields....her nature coming out. Book arrived, going to savor a bit of it tonight. Have to spend time languishing over this book. xox

Well done, Marcella. I can hear your pride while reading this post, Katherine. What a good life for such a beautiful and clever Head Mistress. xo Carole

marcella. so beautiful, so clever, so focus'd.
good on you, girl….good on you….