Marcella and the grumpy pig unite in girl power 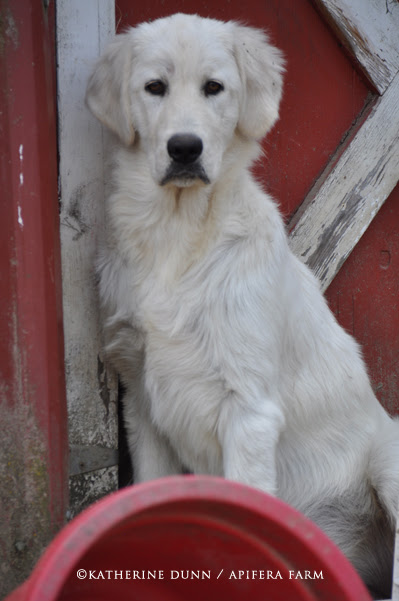 Martyn and I have been working manically on getting everything ready for the June 15th Pino Pie Day [are you all coming?], but that doesn't mean I can't take time for breaks to sit and really watch the various animals, their language with each other–and me, of course. It is all fun, and I learn or see something new each time.

Watching Marcella mature over the past 6 months has been both amusing and frustrating, but also so interesting. One thing we've both witnessed several times is Marcella appearing to step in and guard Rosie, when Earnest gets too amorous with her. Rosie has show no signs of being interested in a roll in the hay with Earnest [she was spayed early on] and when Earnest starts showing signs of his Mojo working, Marcella slips herself between the two of them to keep Rosie out of his reach.

But then last night I witnessed Rosie step in and intervene when Earnest started getting lovey with Marcella.

I don't believe it is jealousy, I think it is just two girls instinctively knowing they aren't in heat, so they say,

"Back off Little Big Man."

My God, did you or I ever think these two females would ever work together like this? Just a few months ago I wondered if Marcella would ever understand Rosie Language-a hard one to decipher depending on her grumpy level that day.

But don't feel sorry for Earnest. I think he is the happiest guy around. Different ladies all over the place to swoon, his own barnyard, a field of daisies and grass to go on dates with Doris and June, his own swimming mud hole with private beach, belly rubs from me, fresh eggs at a whim–the guy is in hog heaven. Today he stopped by the pony paddock while I did feedings and Mama Sugee was in heat so he did some real flirting. A pig flirting with an ear less, blind old pony-now that was fun to watch.

Marcella continues to mature and I've noticed some leaps. She is quicker to stop puppy play when I say, "STOP!". She still loves to taunt Earnest and grabs his tail and ear tips–he could end it quickly if he felt the need. She also is starting to explore other parts of the farm-which was bound to happen, and it is okay. She is after all here to guard the fence line of all 22 acres if needed. So today she found her way into the donkey paddock through Old Barn. There was no problem, and since in time I plan to drive the sheep through their to get tot he upper field, she is one step ahead of me.

This month she will go into get spayed–a necessary requirement to keep the gentleman callers away. And besides, she has one boyfriend, a pig, she doesn't need a canine calling. 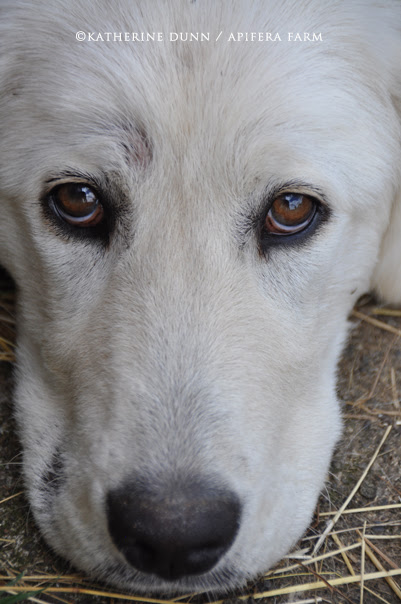 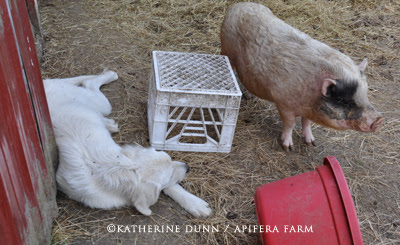