Message from a father 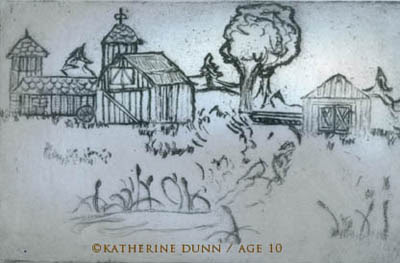 My heart skipped a beat this morning.

I completely forgot about this little intaglio print, and found it tucked way back in a closet. I did it at age 10, and gave it to my father back then. He framed it and had it in his office for all those years.

Near the end of his life when they were moving again, and I was living here at Apifera, he gave it back to me because he thought it was now meant to be with me. I remember at the time I was sort of hurt he gave it back, but not really–and I didn't say I was hurt, I accepted as I knew it was meant as a gift, and he was down sizing.

But now this morning when I looked at it, it was like his voice said loud and clear the words he never was very good at finding-

"Look, you dreamed that dream of a farm long ago and now you have it! Good for you!"

I also remembered that my mother, some time after my father died, mentioned the little print, and how he really thought it was meant to be at my farm. I had tucked it back in the closet some years ago when we were remodeling at some point, and it was rather ironic I pulled it out now–as I am once again dreaming of the next barn.

Posted by Katherine Dunn/Apifera Farm at 11:22 AM