Land messages a place of sense 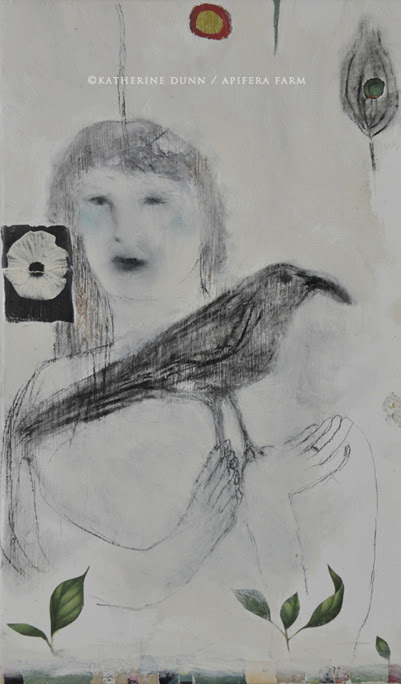 Back in my former city life in Minneapols-which seems like a short time ago, but also a life time ago, I believed that crows brought me messages. I believed this with all my heart. At the time, I was seeking, a lot of things. I wanted a mate, I wanted a sense of place which I didn't quite have - yet. I wanted purpose and vibrancy in my daily steps. I wanted to feel secure.

Like many seekers - I reached for many false talkers who I hoped would give me quick answers and clues to get me on a track that was meant only for me. I read a lot of books - some I look back at and realize how wobbly my land legs must have been to have read into such dogma. I guess it all got me moving around in certain directions, and made me seek my own answers, which is what it is all about in the end.

But I never stopped believing that crows were harbingers of important messages. At one particular time, when I was attached to a drowning man who was only dragging me along on the bottom of the sea, I believed that when I saw two crows together, it was a message that this man and I were still as one, still meant to be a couple.

I would like to officially apologize now to all crows.

Last year when my mother died, a mourning dove began arriving and sitting nearby, for long periods of time. I had never witnessed a dove sitting for such long time spans, close, patiently. I believed it was my mother. I still believe that. That dove stayed and would appear in the next few weeks when I needed it most. I'd come home up the drive and there she would be, sitting on the lower gate, waiting for me. I'd hear her cooing in the morning outside my window and this helped me get up and carry on. Just about any dove I saw, I took to be 'that dove' and believed it with all my heart. In time, I'd see the dove with another dove, and that became my parents, together, looking in on me before they flew off to their current realm.

The fact that I really did believe this is what helped get me to this 'place of sense' that we now call Apifera. I think to land in one's path takes not so much believing in oneself, but believing in...crows bringing messages, or doves becoming mothers. I had to unzip my body and step out of it, in order to see the possibilities of what my life could really be. By finally taking the plunge and leaving my homeland in Minnesota, I sacrificed things that brought me comfort-having my parents near by and having wonderful friendships that took time to nurture. I sacrificed what I knew like the back of my hand-the old neighborhoods I'd grown up in, the stores and street scenes that had many memories and gave me a sense of knowing where I was. I gave up not needing a map to find anything.

And I gave up a little house with wonderful old trees. I had to let go of the trees. But trees are a clan, a wise woman told me soon after. Where ever you go-the trees are connected to one another.

Living on land engulfs a person in messages. One is acutely more aware of harbingers of all season, storms, trouble and danger. The intuition we had when we once swam with dolphins is honed out here. I am still not as aware as the eagle over head, but part of the reason I feel so 'on my path' on the farm is I am a crow, I am a dove, I am the land as I form a continuum from dirt to working boot to breath. And that dove is still my mother when I need it to be.
Posted by Katherine Dunn/Apifera Farm at 11:59 AM

Email ThisBlogThis!Share to TwitterShare to FacebookShare to Pinterest
Labels: Art, Land, Life on the farm, Wisdom

Thank you for such exquisite writing.

crows being so wickedly smart perhaps were trying to send you messages and perhaps you weren't quite able to interpret their nuanced tales. your art is infused with your willingness to share language and life with other creatures. a fierce crow brought me the news of my fathers death years ago.

Thanks, Melissa. Elizabeth-I certainly feel crows can still bring me messages, but I do feel we often take the messages we want, not what the message is as you are stating. Thanks, S.

you hit the nail on the head with this one Katherine...messages come in many forms and when they do, they are so welcome. beautifully written.

katherine. dear sweet katherine.
for some reason [now apparent] you have been on my heart the past few days.
i send you a big ol' alaska hug....
xO

holy smokes, that was some great writing. thank you.

Crows encourage us to walk our talk - they certainly do. Crows can also be tricksters, asking us to look at things from a different perspective, or downright playing tricks on us, as Coyote does. Crows (and Ravens) are wonderful companion guides, to be sure.

Marvelous post. I felt an intense understanding of the words unzip my body and step out of it....at the farmhouse today, doing some work, getting ready to move in a month or so I just wanted to hear the birds, the cat birds especially who first welcomed me there....Maybe the unzipping of the body and stepping out of it is the sinking into the land and let it take you where you need to go. xox

One of my most favorite posts of yours! Beautiful writing - what a gift. Thank you for sharing your words and experiences with others.

You wrote what I have experienced/believe/know! With eyes and heart open, the messages abound! I have many guests visit me ... whether it is the way the downy woodpecker carries himself that triggers an association with my spiritual teacher or simply the qualities of an animals way of being in the world that provide me insight into my own relationships, habits of mind and heart ... what matters is the calling me back to this moment and the choices I do have: to love, to believe, to trust in myself and Source. Hawk is always giving me a "thumbs up" meaning I am on my path!

The similarities continue to amaze me Katherine... just after mom's death, the feeder just outside my window was attracting more birds than ever. I would have several mourning doves come and linger, long after they had had their fill of seed. I imagined them to be my mom. Doves still come day after day. Perhaps because mom knows I still need her. I still need her comfort and watchful eye.
I am seeking... I am seeking what is next for me, shifting into a new phase. I pray for the strength to continue searching because there are so many moments I feel lost.

Hi everyone, it appears our winged friends are symbolic to so many, and for good reason- those wings of flight can lift and soar-I think that alone is appealing in times of sadness, dispair.

Tracie, you just take a moment at a time. You lost your mother much younger than me-I would have been much more wobbly had that happened to me too. I know your best friends, as I was with mine, know how hard it is, my friend. You just keep looking for doves.