From lamb to man, er, ram 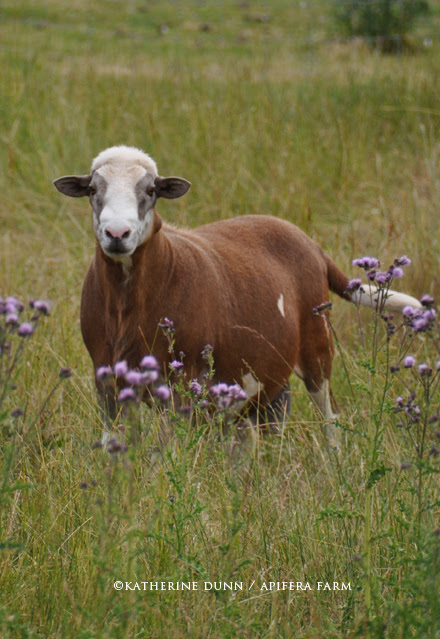 We named him "Little Walter", after a blues singer–a working ram's life has definite perks, but a guy can get the blues when he has to leave his girls and hang out with the boys again in the off season.

Time has flown since I first brought Walter home. He was about 7 months old then and I brought him on to keep the line fresh, plus I loved his color and his sire's disposition and build. Walter is still a complete gentleman at age three with two breeding season's under his belt. Sometimes after breeding, a ram can get more dominate, but so far, Walter remains a charmer. And he throws wonderful color and size.

Some farms choose to switch out their ram after two years, to keep the line healthy. For those not in the know, you don't want to be breeding a father into a daughter, so obviously if you have related ewes, sooner or later you need a new ram, or a separate flock of ewes. We've done a bit of both. And because of that, I plan to keep Walter forever, even after retirement-unless he goes aggressive on me. Right now, I still have EB White and plan to sell him as he is so related to our flock. He is a nice guy, no real trouble with him, but he is more dominant in the ram field. I have two beautiful ram lambs out of Edith and Walter that I'm holding onto, so there are 4 rams in the field together. Once EB White is gone, I might see a shift in Walter's personality, but I'm thinking not. But who knows-I'm not in charge of that. I just really like Walter a lot. Even still, he is a ram. I never lose sight of that when I'm working in his field.

I had one ram-Joe Pye Weed-who I had a love-hate relationship with. I always had to have a stick or rake with me around him. Once I was safely out of his eyesight having left the barn, and he turned around came out the barn and nailed me from behind, badly, got me to the ground. He went off to live on a dairy farm and is probably gone now. When that farmer came to pick that ram up, I asked him to shake on it, that he'd let Joe die on the farm there. I hope he lived up to his word-but it's not my farm or operation. And in hindsight, if I had a ram like Joe now,  I'd relocate him one way or another. I need to keep my oxygen mask on firmly, safely, before I help all the critters on the boat.

Walter developed a white crew cut look after his second year. I found that so charming as well as amusing. And it definitely gets passed to his offspring. I think he looked fabulous next to the thistle- which I did mow down after this photo–so all you arm chair farmers don't have to jump on me. Besides, I'd be happy to have you come out and live in the ram field and help de-thistle.

Email ThisBlogThis!Share to TwitterShare to FacebookShare to Pinterest
Labels: Life on the farm, Little Walter, Sheep of Apifera

I like his coloring and coat pattern, very distinguished. He is a lucky ram to have such a good place in your heart.

He has a really distinctive look and the crew cut is perfect for this laid back giy. xox