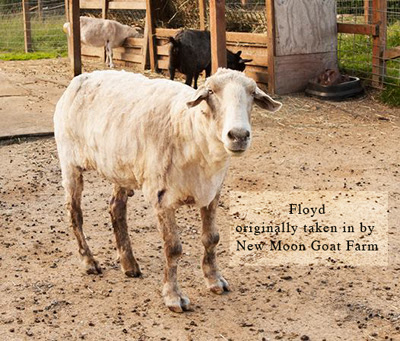 I have two exciting things to share today-they both deserve equal time. But I will start with the wonderful news that three more senior creatures are arriving from New Moon Goat Farm Sanctuary in the next couple of weeks.

I have had a crush on Floyd since I saw him a couple of months ago. He is an elder statesman, and from I hear, already has a fan club up at New Moon-many were happy he was coming to Apifera, but let out a big sigh when they heard he was leaving. Floyd is a 13 year old mixed-breed wether sheep. I have never taken in a sheep, as to protect the health of my own flock, but Floyd is an exception for me. He just spoke to me. This is usually how it happens-I see an animal and we have some kind of internal conversation through our eyes, and it grows over the days. In time it becomes apparent to me that animal is meant to come here-for whatever reason. I do seem to have a knack for bonding with the ones near death, but that is okay, I am attracted to hospice work with animals. But, We hope Floyd will be with us for a long while, although he is 13. We hear he is the biggest, goofiest, friendliest sheep you'll ever meet. Sounds like a fit-and maybe a nice change for Stevie, since Floyd is tall. Sometimes I wonder if Stevie looks around and thinks,

"Everyone is so squat around here except me."

We are also bringing home two elder goats that were severely neglected. Victor was the worst off, and now has a deformed spine and hips causing him to walk oddly, but he seems to be pretty content according to Ellen and she notes he adores people. He will be coming with Sophie, an 8 year old Angora doe who is "sassy". If you want to see the work New Moon did when they first acquired Victor, here is a brief look. Victor was so matted for so long that he was raw under the wool, including his penis. His feet were horrible and I'm sure will give him trouble as he ages. They still have a ways to go to gain weight but have a new start on life thanks to New moon's efforts, and now ours.

I'm so excited to meet them. When I decide to take an animal on, I get very anxious before their arrival, as I feel like they know they are coming. This mystical connection is something I truly feel, no matter how woo woo it might sound to some. Some animals seem to have a stronger energy, but I always am relieved for everyone when they are on the ground, here, safe and open to a new life, even if it is the end of a life.

If you'd like to send a donation or make a monthly subscription donation [at reward levels, or no rewards, visit here. All help is greatly appreciated,needed, and used with love and care! 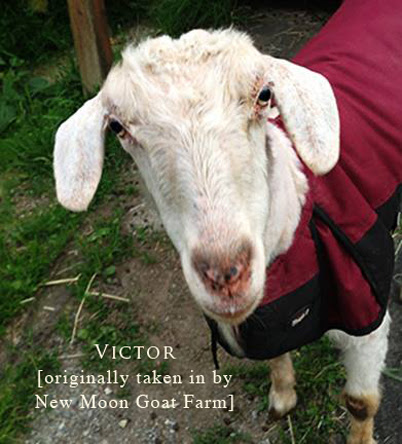 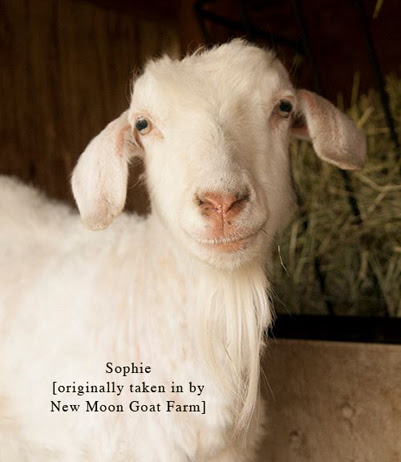 Posted by Katherine Dunn/Apifera Farm at 11:52 AM

What a sweetie you are to give homes to these adorable new friends; I love your mystical connection to them, and it doesn't sound woo woo at all.

Floyd is adorable....and the goats, don't understand people, just don't. They are so lucky to have you and to be part of your tribe. xox