A mother returns in a tulip, and a horse turns 17 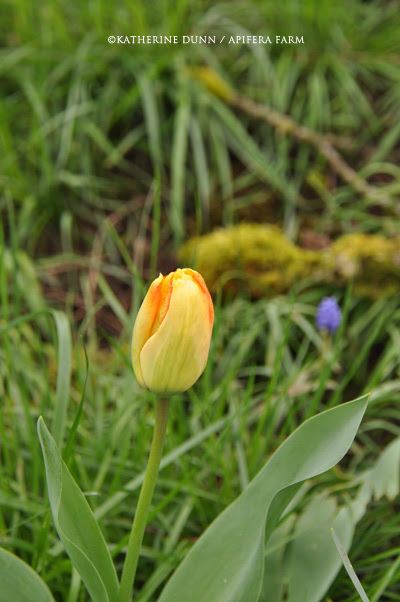 On April 4th of 2013, my best friend died-my mother. She was only 87. I say "only" because you never would have guessed her age and I never totally acknowledged she'd ever die.

And on April 4, 1998, another good friend of mine was born. A big red horse with a sturdy build and stoic manner entered the world, far from me in another time-when I still longed for a farm and horse and was living in Minneapolis, my horse had entered the world. I often think of him those first 10 years with out me- what was he doing, what did he look like as a colt?

So when my mother died, suddenly, two years ago, I was in shock. The little birthday ride I had planned on Boone that day did not happen. I felt everything leave my body that day. At first I thought it was a real drag to have my horse's birthday entwined in my mother's death. Anniversaries bring up so much-and now how would I ever forget her death day, as I can't forget it is entwined with Boone.

That day as I did feedings, I told Boone,

"My mom died," and I cried into his neck. He ate his hay in contentment. I cried. He ate, I cried. And I realized, this is a wonderful merging of two circumstances-a death and a birthday. I remember thinking at that moment,

She was still the mother, saying in her matter of fact way,

"Now, look, I know I died and you are sad, but get on that horse! Remember how long you waited for him? Don't worry about me, I'm fine."

I thought this last year on the 4th, and I will think it this year, and in years to come.

We are here in the living. I plan to shed a tear whenever I need to, but I am happy in the living, for now. I suppose at some point, and it may only be a seconds worth of time, I'll be ready to go. But for now, I will celebrate the 4th as a Celebration of the Gifts of Death and Life.

Death is to life as night is day. It has been said in much more poetic ways over and over for centuries. Nature shows us the entwining of the two states of being each day-how can the flower be born if it's seed pod isn't broken apart only to become a shoot breaking through the underworld. The farm of course is the grandest theatrical production of life and death on stage together. Just as life wins the hearts of the audience, a mysterious stranger comes into act two only to take over, again.

The day my mother died many messages were brought to me. I was sending out invisible S.O.S's, and the universe around gave me as many lifts as I was open too. My mother loved tulips, and she gave me a huge quantity of tulip bulbs to plant at my farm-some years before she died. Within time, the bulbs petered out, and each spring there were fewer tulips. And the year she died, I saw only one shoot coming up. And it bloomed at her death. I treated that tulip not like a symbol of my mother-I treated it AS IF IT REALLY WAS my mother. I put a protective cage around her so the sheep wouldn't trample her as they went to the fields in the morning. And as her petals began to fall, it was like losing her all over. But then I remembered the lesson of her death day. It's life that remains to be cherished. There was beauty all around the fallen tulip, that tulip had done her job.

I wasn't sure if Mother Tulip would return this year, but she did. This year, I smiled and smiled when I saw her.  It was like getting a bouquet of one from her. She is still the only tulip in the front yard.

Circles of living...woven in your words.
Peace to you...

Such gifts ... they keep coming, don't they? My mom was The Best gift giver ... she would notice what I had longingly looked at and find a way to secretly get it and then surprise me. So I suppose it shouldn't be any different now? Moms, they continue to do their motherly thing and what a gift to continue to receive their love ... xo

And the seasons....funny how just one tiny thing can bring on so much. xox